(Reuters) - U.S. stock index futures rose on Wednesday after Google-parent Alphabet reported upbeat quarterly results, while investors braced for data that could show a sharp contraction in the domestic economy. 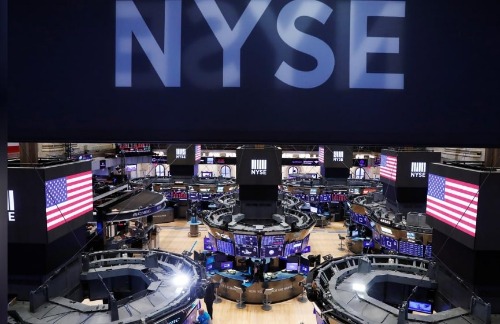 Alphabet Inc jumped 8% in premarket trading, as a drop in Google ad sales steadied in April and some consumers returned to using the search engine for shopping in addition to finding coronavirus information.

Wall Street’s main indexes closed down on Tuesday, as investors shifted out of growth stocks and into more value-oriented cyclical names. But the main indexes have recovered 30% from their lows in March, boosted by aggressive stimulus efforts and, more recently, hopes of an economic revival as states begin to relax lockdown measures.

The U.S. economy likely contracted in the first quarter at its sharpest pace since the Great Recession as strict lockdown measures curbed consumer activity, ending the longest expansion in the nation’s history.

The Commerce Department’s report, due at 8:30 a.m. EDT, is expected to show a decline in gross domestic product (GDP), which will further reinforce analysts’ forecasts that the U.S. economy was already in a deep recession.

Also up is a policy decision from the Federal Reserve and more corporate earnings reports from planemaker Boeing Co before the bell and technology heavyweight Microsoft Corp later in the day.

The Fed is slated to issue its policy statement at the end of its two-day meeting on Wednesday at 2 p.m. EDT (1800 GMT), where the central bank is anticipated to reiterate its promise to do whatever it takes to support the world’s largest economy.

Analysts now expect S&P 500 earnings to decline 14.8% from a year ago, a dramatic U-turn from the 6.3% year-on-year growth seen on Jan. 1, according to Refinitiv data.

Reporting by C Nivedita and Shreyashi Sanyal in Bengaluru; Editing by Bernard Orr