Brexit's Back: Double-Whammy for Sterling After Virus Shock

LONDON (Reuters) - Shoved aside by the coronavirus pandemic, Brexit is set to work its way into the headlines again as a June deadline for extending Britain’s 11-month transition period turns currency traders’ focus - and selling pressure - back to the pound. 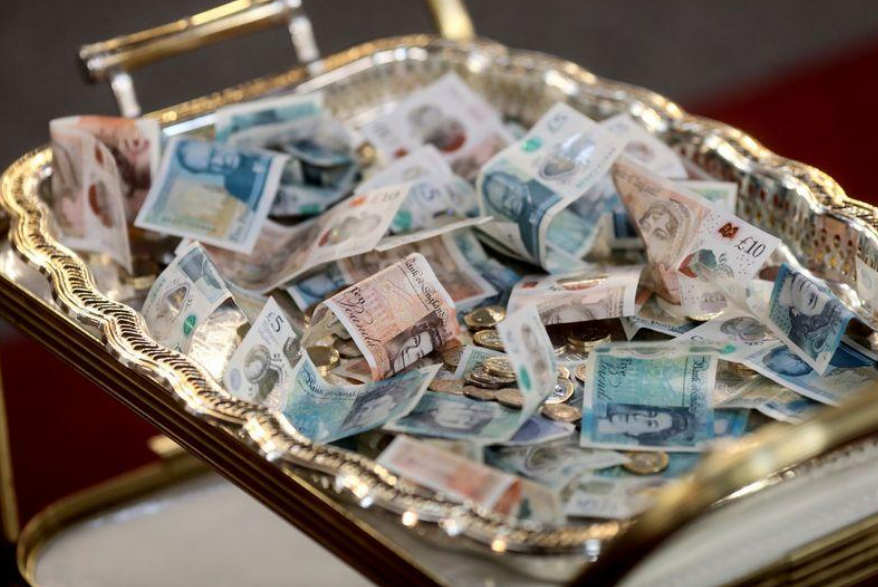 Last week, at talks to negotiate a post-Brexit trade agreement, Britain’s government reiterated its pledge to walk away from European Union without a deal if one cannot be reached by the end of the year.

And unlike in 2019 when lawmakers were able to block a no-deal Brexit, Prime Minister Boris Johnson’s large parliamentary majority makes this a real possibility. Yet, with focus squarely on COVID-19, the pound barely batted an eyelid.

Britain being cast adrift from its biggest trade partner is widely expected to inflict huge damage on an economy already predicted by the UK budget watchdog to post its worst recession in 300 years.

That means sterling may be about to take centre stage again with only a little more than two months left to request an extension to the Dec. 31 deadline.

“Foreign exchange does this, we leap from one monstrous issue to another,” said Kit Juckes, head of FX strategy at Societe Generale.

While sterling has bounced off 35-year lows of around $1.14 hit in March, gaining nearly 8% in the past month, Juckes attributed that to corporations repatriating money before the earnings season and other unavoidable trades.

“March was about fighting the immediate fires... May will be back to fund managers making asset allocation decisions,” Juckes predicted.

Recent moves have left the pound around 5 cents above its 2019 lows when it was being driven by the ins and outs of Brexit, but sterling risk premia never really went away.

Implied volatility on the pound against the dollar — an options market gauge of expected price swings — remains well above that of other major currencies. 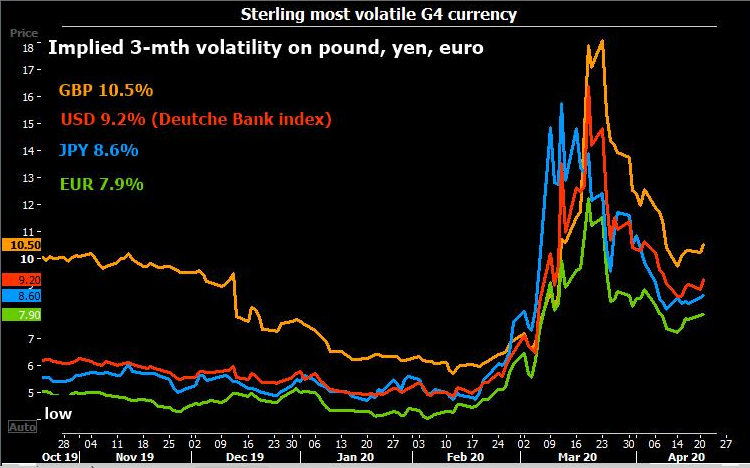 One-month risk reversals, a ratio of bullish to bearish bets, shows investors are being charged more for pound ‘puts’ than ‘calls’ — options conferring the right to sell and buy sterling respectively, implying downside for the currency.

Still, three-month options encompassing June, the crunch time for determining whether or not Britain leaves with a deal, have barely budged. That suggests investors’ attention has been wholly consumed by the coronavirus pandemic.

Neil Jones, head of FX sales at Mizuho reckons machine-trading algorithms, which many banks used to react to Brexit news, have simply been adjusted as the virus dominated headlines.

That may change in coming weeks, with Brexit talks scheduled for the weeks beginning April 20, May 11 and June 1. The process will be reviewed in June.

“Ultimately (the machine-trading) model is driven by discretionary decisions and you can switch on and off certain factors and forces if you don’t feel it’s relevant any more,” Jones said.

A credit rating downgrade from Fitch last month highlighted Britain’s frailties —a current account deficit around 3% of GDP plus a likely explosion in national debt from increased spending to counter the downturn from measures put in place to slow the spread of the virus.

The pound’s REER — the exchange rate against trade partners’ currencies and adjusted for inflation — already carries an 11% Brexit premium, JPMorgan analysts estimate, based on the deviation from its 20-year average.

But they said this would not be enough to compensate for ending the transition period without a trade deal given “the disruption to trade would compound the risk of long-term damage from COVID-19”.

Meanwhile, investors have gradually turned bearish on the currency. Last December, a long-standing sterling ‘short’ position flipped into a net ‘long’ as the election outcome promised to clear Brexit deadlock. There are still a net $3.2 billion worth of bets that the pound will go up, but that number has been falling for the last six weeks.