BEIJING (Reuters) - China’s factory activity expanded at a stronger pace in June in a boost to hopes for a quick economic recovery globally and at home, but the persistent weakness in export orders suggests the coronavirus crisis will remain a drag on growth for some time. 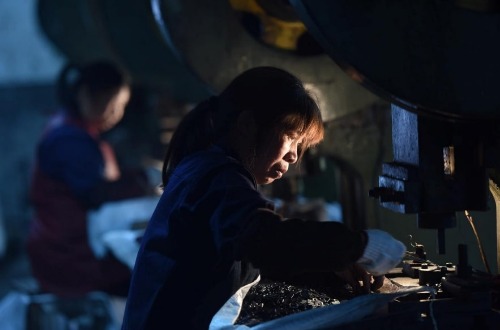 The official manufacturing Purchasing Manager’s Index (PMI) came in at 50.9 in June, compared with May’s 50.6, National Bureau of Statistics (NBS) data showed on Tuesday, and was above the 50.4 forecast in a Reuters poll of analysts.

The 50-point mark separates expansion from contraction on a monthly basis.

The uptick was underpinned by the quickening pace of expansion in production. The forward-looking total new orders gauge also brightened, rising to 51.4 from May’s 50.9, suggesting domestic demand is picking up as industries from non-ferrous metals to general equipment and electrical machinery all showed an improvement.

But export orders continued to contract, albeit at a slower pace, with a sub-index standing at 42.6 compared to 35.3 in May, well below the 50-point mark.

“Despite the strong recovery between March and mid-June, we believe a full economic recovery remains distant. In our view, it is too early for Beijing to reverse its easing stance,” Nomura analysts wrote in a note to clients.

In a statement, NBS official Zhao Qinghe underscored the prevailing uncertainty about the outlook, noting that small firms in China are suffering more than their larger peers.

Indeed, despite a flurry of government measures to support smaller companies, the PMI survey showed activity in these firms contracting last month.

Shanghai prime machinery, a Chinese manufacturer of fasteners that has been forced to close a factory in Germany this year due to the pandemic, said on Monday it expects to record a net loss of up to 40 million yuan in the first half of 2020, compared to a net profit of 114.7 million yuan in year-ago period.

Beijing has stepped up support measures this year to revive the economy, which contracted sharply in the first quarter.

High frequency Chinese data tracked by Nomura showed a flurry of better-than-expected indicators recently, including power production, property and auto sales, while higher spending - particularly in infrastructure - was expected to boost economic activity for the rest of this year.

A separate official survey on China’s services sector showed activity expanded at a faster clip in June. The non-manufacturing Purchasing Managers’ Index rose to 54.4, from 53.6 in May, suggesting steadily stabilising business confidence.

Still, a sub-index for construction activity, a key driver of growth, fell to 59.8 from 60.8 the previous month, highlighting the uneven nature of the recovery both in the sector and the overall economy.

Some analysts have warned against being overly optimistic about the outlook given uncertainties around the COVID-19 pandemic.

While the improvement this month might be due to easing in restrictions across some countries, export demand has remained weak overall with infections steadily rising across the world.

Some fear a worldwide recession might turn out to be more pronounced than expected in the event a second wave of coronavirus cases force many countries to reimpose strict lockdowns.

Adding to the worries domestically is a cluster found earlier this month in a food market in Beijing, underscoring the ever present economic threat posed by the virus.

Despite stronger demand, factories reduced headcount for the second time in June since they reopened, with the survey’s sub-index falling to 49.1 from 49.4 in May.