PARIS (Reuters) - France suffered its sharpest economic contraction since records began in 1949 in the first quarter, as a coronavirus lockdown from mid-March left shops shuttered and consumers hunkered down at home, data showed on Thursday. 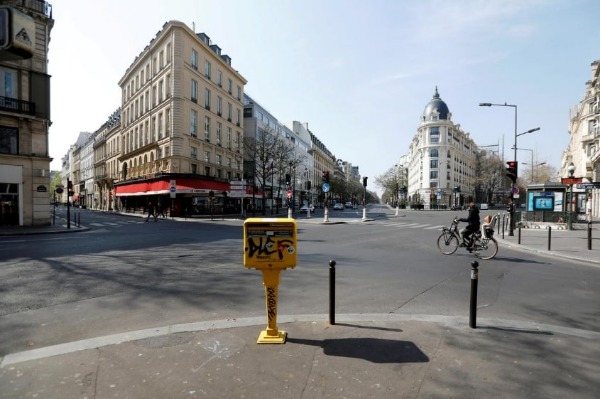 FILE PHOTO: A cyclist rides on the deserted Grands Boulevards in Paris as a lockdown is imposed to slow the rate of the coronavirus disease (COVID-19) in France, March 27, 2020. REUTERS/Charles Platiau

With the curbs on activity set to run at least until May 11, economists said the first quarter plunge was only the beginning of a downward spiral and there would be a long, painful slog to recover lost ground.

The slump was the deepest on a quarterly basis since World War Two.

It surpassed economists’ average expectation of 3.5% in a Reuters poll, and the 5.3% of the second quarter of 1968, when France was gripped by civil unrest, mass student protests and general strikes.

Since March 17, France’s 67 million people have been ordered to stay at home except to buy food, go to work, seek medical care or get some exercise on their own.

INSEE said consumer spending, usually the driver of the French economy, dropped 6.1% in the first quarter from the previous three months while business investment plunged 11.4%.

The lockdown is due to begin winding down from May 11, but the government has said that bankruptcies and unemployment are likely to rise steeply in its wake.

French credit insurer Euler Hermes said in a research note it expected GDP to shrink 16% quarter on quarter in the three months to June.

Highlighting the immediate impact of the lockdown, INSEE said in a separate release that consumer spending plunged nearly 18% in March from February with manufactured goods down 42%.

The government expects the economy will contract at least 8% this year and has rushed through a crisis package worth 110 billion euros - 4% of GDP - to help companies and workers.

More than one in two private sector workers has been put on state-subsidised furloughs aimed at staving off permanent mass layoffs.

Euler Hermes forecast a full-year GDP contraction of nearly 9% on the expectation that activity would resume only gradually, with manufacturing and construction reaching pre-crisis activity levels at year-end while services would remain below that until the second quarter of 2021.