The dollar retreated on Monday against major peers as a wave of M&A deals lifted the mood on global equity markets and investors looked ahead to an event-packed week which includes a Fed meeting and the appointment of a new Japanese premier.

Attention focused on the pound as the UK parliament prepared to debate a draft bill which the government admits breaches the terms of its EU divorce treat. The currency firmed 0.4% versus the dollar after suffering its worst week since March.

The gain was partly down to the dollar index which slipped 0.2%, after firming for two weeks straight.

This week’s U.S. Federal Reserve meeting will be its first since Chairman Jerome Powell unveiled a policy shift towards greater inflation tolerance, effectively pledging to keep rates low for longer.

“There will be pressure on the Fed to back up the new policy goals with some action,” said MUFG strategist Lee Hardman, noting inflation remained well below target.

“Expectations are they could strengthen forward guidance, possibly by saying rates will be on hold for 3-4 years,” said Hardman, who remains bearish on the greenback. 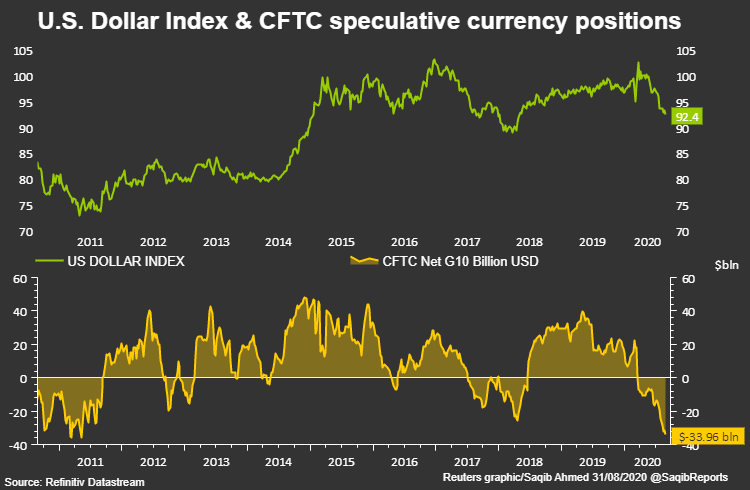 Analysts at Standard Chartered said there was a risk the Fed would disappoint dollar bears.

“Having set aside yield curve control as a near-term policy option, the FOMC does not seem to have an operational consensus on how to use the balance sheet,” they told clients. “This may disappoint investors.”

The single currency had spiked to a one-week high above $1.191 after Thursday’s European Central Bank meeting before easing back as policymakers talked it down the next day.

The yen meanwhile rose 0.13% to around 105.9 yen to the dollar, a five-day high. The Bank of Japan's meeting on Thursday is not expected to yield any policy changes but it may be quizzed on whether it could follow the Fed's inflation stance.

The Reuters Tankan survey on Monday found Japanese manufacturers pessimistic for the 14th straight month in September, underlining the challenge the country’s next leader faces after the economy sunk into its deepest recession ever.

“The focus is on the line-up of his cabinet as well as whether he will call a snap election,” said Minori Uchida, chief FX strategist at MUFG Bank. “He is saying he will continue and advance Abenomics but it is questionable how much advancement he can make.”