SINGAPORE (Reuters) - The dollar eased on Wednesday as the slowing spread of the coronavirus and moves to re-open economies encouraged investors’ to favour riskier assets, though there was caution ahead of central bank meetings in the United State and Europe. 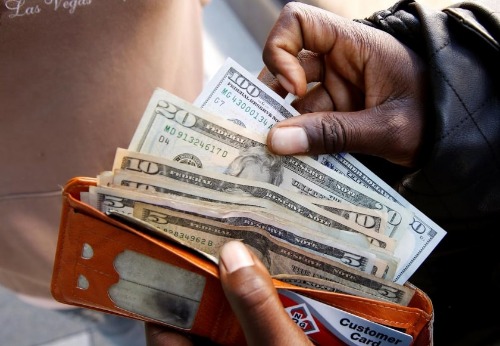 FILE PHOTO: A man displays US dollar notes after withdrawing cash from a bank in Harare, Zimbabwe, July 9, 2019. REUTERS/Philimon Bulawayo

The dollar has tracked risk sentiment closely through the coronavirus crisis, and was broadly softer on other majors on Wednesday, slipping a fraction against the rangebound euro and pound, while the yen strengthened 0.3% to a six-week high 106.55 per dollar.

The greenback lost most ground against the Antipodean currencies.

The Australian dollar rose about 0.6% to a seven-week high of $0.6533 - a sixth straight daily gain that has it tracking toward its best month in four years. The kiwi rose by the same margin to a two-week high $0.6119.

A public holiday in Japan and caution ahead of the U.S. Federal Reserve meeting ending later in the global day, and the European Central Bank meeting on Thursday kept currency markets subdued.

Investors will be watching for clues on the Fed’s future policy path after it responded to the economic devastation of the COVID-19 pandemic by slashing rates, buying bonds and backstopping credit markets.

“There’s no expectation the Fed will change policy,” said Joe Capurso, FX analyst at the Commonwealth Bank of Australia in February.

Capurso said Fed’s view of the extent of the economic contraction caused by the coronavirus, and how long it might hold rates at emergency levels, will be of key interest to investors.

The Fed is due to issue a statement at 1800 GMT, followed by a press conference with chairman Jerome Powell at 1830 GMT.

But before that quarterly GDP numbers will be released at 1230 GMT, with concensus forecasts for a contraction of around a 4%.

Cases of COVID-19, the respiratory illness caused by the virus, topped 1 million in the United States overnight but investor focus is now increasingly on plans to relax restrictions and restore a battered economy.

The risk-sensitive Australian dollar has benefited from investors focusing on the positives.

The Aussie has soared - rising some 6% on the month and 18% from March’s 17-year low - as China, its major export market, began reopening its economy as the coronavirus epidemic subsided there, and recent move by Canada, France, Italy New Zealand and Spain have also helped confidence.

“This is quite extraordinary,” said National Australia Bank’s head of FX strategy, Ray Attrill. “It didn’t underperform the G10 pack by nearly as much in March, and does leave us a little cautious about the near-term outlook.”