(Reuters) - European equity markets ended lower on Thursday with resource stocks weighing the most, while an aggressive growth strategy from the U.S. Federal Reserve was met with little fanfare locally. 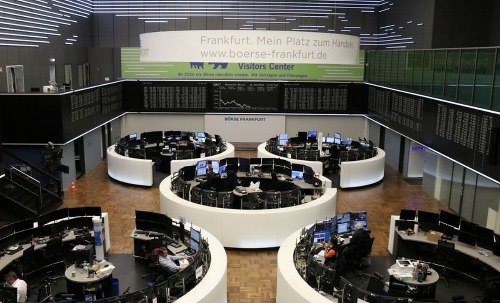 Local stocks also lagged their peers in the United States, with Wall Street indexes touching new highs after the Fed announcement. European shares are yet to recover entirely from lows hit during the pandemic, unlike Wall Street. [.N]

“Europe is lacking those mega tech stocks that have been driving the S&P 500 and the Nasdaq. (U.S. stocks) also know the Fed is willing to do whatever it takes,” said Connor Campbell, analyst at spreadbetter Spreadex.

The Federal Reserve on Thursday rolled out an aggressive strategy to restore the United States to full employment and lift inflation back to healthier levels.

“The Fed’s new language gives them the flexibility to let the economy run a little hotter before contemplating raising interest rates and gives the green light to more modest yield curve steepening and dollar weakness,” economists at ING wrote in a note.

HSBC fell 1.1% after it came under fresh U.S. criticism for its reported treatment of customers linked with the pro-democracy movement in Hong Kong.

A Reuters poll of fund managers showed European stocks are expected to stall for the rest of 2020 and miss out on the bull market.

Recent data has also suggested that an economic recovery in the bloc may be stalling after jumping sharply from pandemic-driven lows.

Among individual stocks, WPP, the world’s biggest advertising company, jumped 6.5% as it resumed its dividend after cost cuts and a switch to faster ad production helped it beat dire forecasts for second-quarter trading.

French conglomerate Bouygues rose 1.3% after reporting a lower-than-expected core operating loss in the first half of the year.

Clinical diagnostics company Novacyt jumped 7% after it launched a test to differentiate between COVID-19 and common winter diseases.

Reporting by Sruthi Shankar in Bengaluru; Editing by Anil D'Silva and David Holmes