GBP was far and away the best-performing currency, as you can see from the chart. No clear trigger that I can find. I assume part of it is just snap-back from its recent weak patch. The currency has been under pressure recently with doubts about the pace of the UK vaccine program and questions about the efficacy of the Oxford/AstraZeneca vaccine, the main one in use in the UK.

Some of those doubts were probably dispelled yesterday when Britain and the EU released a joint statement ahead of yesterday’s European Council meeting saying they are working together to “create a win-win situation and expand vaccine supply for all”, as well as a government spokesperson’s assertion that the UK is “on track to meet its vaccine rollout targets” and the plan to ease lockdown “remains on course.” Parliament voted to extend the Coronavirus Act 2020, which paves the way for the government’s planned reopening.

The UK’s response is diverging from that of the EU, where the trend is in the opposite direction – Belgium and France were forced into new lockdown measures this week and Germany is debating further measures. Moreover, the European Council meeting yesterday laid bare the disarray in the EU’s vaccine distribution plans as leaders clashed over how to provide additional doses to member states. The “tense and sometimes ill-tempered discussions,” as the FT put it, ended with no resolution to demands from predominantly poorer eastern member states for part of 10m in additional BioNTech/Pfizer vaccines.

The Oxford Stringency Index, a measure of how stringent a country’s lockdown and other measures to counter the virus are, shows that the UK is currently in a slightly more severe lockdown than the EU. 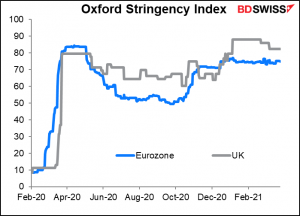 But as that measure shifts – or as markets anticipate a shift in that measure – EUR/GBP is likely to decline (i.e. the pound is likely to gain relative to the euro) as the stringency of lockdowns and the efficacy of vaccine programs are both harbingers of future growth rate differentials. 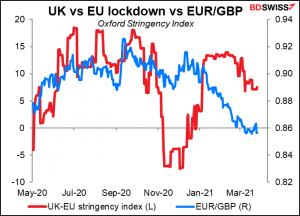 EUR/USD broke below 1.18. There are a lot of EUR/USD put options concentrated around the 1.1750 level, meaning that if the pair falls below that there will likely be further selling of EUR/USD by dealers hedging their positions. On the other hand, most of the EUR/USD calls expiring in the next month are above 1.19, meaning dealers could unwind their hedges (long EUR positions) against those contracts if EUR/USD fails to recover.

CHF fell slightly even though the Swiss National Bank (SNB) toned down its comments about intervention a bit, which one might have expected to cause the currency to strengthen. They said the SNB “remains willing to intervene in the foreign exchange market as necessary, while taking the overall currency situation into consideration.” At their last meeting in December they said, “In light of the highly valued Swiss franc, the SNB remains willing to intervene more strongly in the foreign exchange market. In so doing, it takes the overall exchange rate situation into consideration.” During the Q&A, SNB President Jordan rejected the idea of tying the CHF to a basket of currencies, saying that would cause the SNB to lose the flexibility it needs.

My apologies to anyone who agreed with my outlook for CAD yesterday. USD/CAD strengthened (i.e. CAD weakened) as oil prices fell (despite the fact that it looks like that ship is going to be stuck in the Suez Canal for a lot longer) and longer-dated Canadian bonds outperformed US Treasuries, pushing the US yield advantage over Canadian bonds higher. 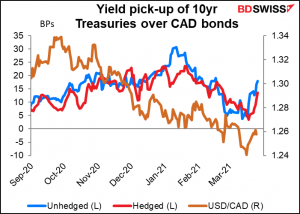 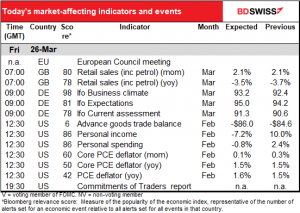 The second day of the European Council summit. Today includes the Euro Summit, where leaders “will discuss how to strengthen the international role of the euro.” I wonder if they will mention a central bank digital currency or any concrete plans to make the currency more widely used.

I wonder if politicians understand how contradictory some of their goals are. The ECB has frequently expressed concern about how a stronger euro might imperil their inflation target (at least, that’s what they say – I think it’s just plain ol’ mercantilism camouflaged by wrapping it up in the language of monetary policy). But if the politicians were to manage “to strengthen the international role of the euro,” that would of necessity mean greater capital inflows into the currency – and therefore a stronger euro, exactly what the ECB doesn’t want to see. Maybe the left hand doesn’t know what the right hand is doing? Or maybe the left hand doesn’t understand the impact of the capital account on the exchange rate? That’s quite possible.

The European data starts with the Ifo business climate. Both the current assessment and the expectations indices are expected to be higher. 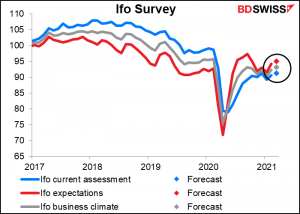 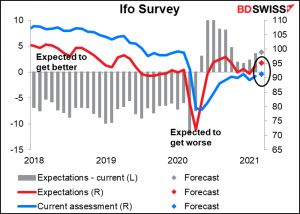 The advance US trade figure, which is trade in goods alone (no services) is the indicator with the lowest Bloomberg Relevance Score that I cover, even beating Japan’s Eco Watcher’s survey (6 vs 8). But since it’s a good predictor of the overall US trade balance, which has a pretty high score (84), I think it’s worth watching. At $86.0bn, this month it’s expected to challenge the record -86.11bn deficit set in November. Shades of the “twin deficits,” which I mentioned on Monday. 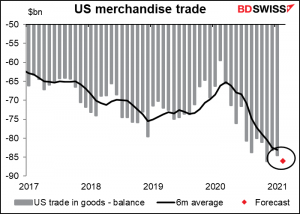 We then come to the major indicator of the week: US personal income & spending. After the huge 10% jump in personal income in January, thanks to the pandemic checks, incomes are expected to fall by 7.5% mom in February. Even so, that would still leave them 4.3% higher than the pre-pandemic level. And another round of checks should be hitting peoples’ bank accounts in March, no? So this figure should be encouraging. 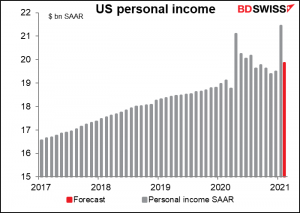 Spending is also expected to be down, but not by as much, just -0.2%. That would put spending only a little (-0.6%) below pre-pandemic levels. 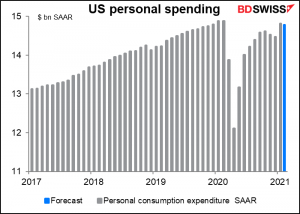 The personal consumption expenditure (PCE) deflators, which are released at the same time, are expected to show inflation accelerating a bit at the headline level but remaining at the same pace in the core measure. This wouldn’t be a worry for the Fed, which as we saw last week is forecasting that PCE inflation will surpass 2.4% yoy this year. It would however mean lower real rates, which could be negative for the dollar. 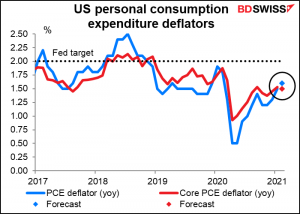 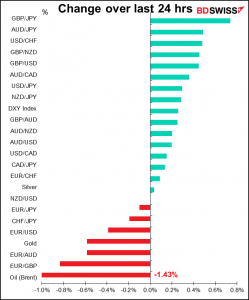