GBP Up, USD Down after US CPI Surprises on Upside

One of the best-known market apothegms is that “the market can remain irrational longer than you can remain solvent.*” Never was there a better example of that than yesterday, when despite an upside surprise in an already extremely high US consumer price index (CPI), stocks rose and 10-year bond yields fell 6 bps. With 10-year breakeven inflation rates up 3 bps, real 10-year yields fell an even greater 10 bps (figures don’t add due to rounding). Fed funds rate expectations for this year and next were unchanged and actually down 1.5 bps from mid-2023 on out.

*this saying is often attributed to the famous British economist John Maynard Keynes, but in fact seems to have been invented by the US analyst A. Gary Shilling. 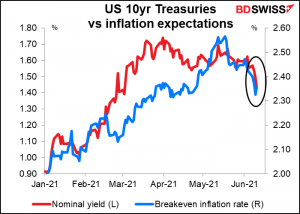 As is typical on a “risk-on” day, the dollar weakened. This is also what one would expect with US real yields falling so much, thereby reducing the attractiveness of the US bond market. 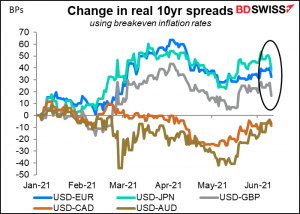 Is the market really irrational, or has it simply accepted the Fed’s explanation that the rise in prices is only “temporary” and “transitory”? That would be a more logical explanation. Many of the biggest price increases were in sectors that have either seen supply constraints or unusual demand related to the reopening. For example, about one-third of the 5% rise in the overall CPI was due to higher prices for used cars & trucks, which were up 29.8% yoy. No one imagines that prices of used cars & trucks will continue to rise at that kind of pace indefinitely. Similarly, airfares were up 25.1% yoy – but that’s just because a year earlier they were down 29.4% yoy. 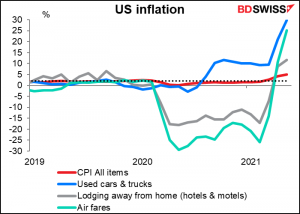 Yesterday’s European Central Bank (ECB) meeting by contrast was not particularly interesting. They decided to continue their purchases in the Pandemic Emergency Purchase Programme (PEPP) at the same accelerated pace, which is what the market had expected. There was little impact on the currency. This is however a dovish tilt to the ECB, because they are continuing with this extra stimulus even though they revised up their growth and near-term inflation expectations significantly (although the end-point forecasts for inflation of 1.4% in 2023 remains the same, which is probably why they kept the stimulus in place). In addition, they shifted the risk assessment from risks being tilted to the downside in the near term to “broadly balanced.”

GBP was the best-performing currency as gilts yields moved higher. For some reason gilts seemed to react more to the US CPI than the US Treasury market did, perhaps because of the gradual hawkish tilt of the Bank of England’s Monetary Policy Committee? Next week we get UK CPI (Friday), which could be the trigger for a stronger GBP if it too comes in notably higher. 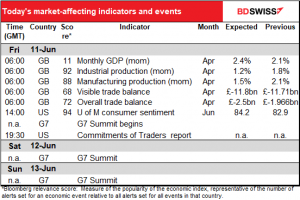 The UK indicators are already out. They showed a somewhat mixed picture, with GDP and manufacturing production disappointing but industrial production beating slightly and the trade deficit much narrower than expected.

After that, the only major indicator out today is the University of Michigan consumer sentiment survey. Sentiment is expected to be up slightly, expectations effectively unchanged. 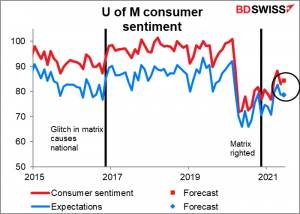 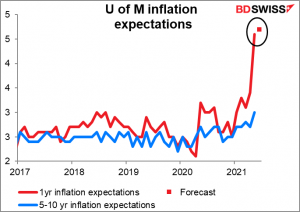 The G7 summit meeting begins on Friday and runs until Sunday. The Group of Seven is an international organization made up of the world’s seven largest advanced economies: US, Japan, Germany, UK, France, Italy, and Canada. The heads of government plus representatives of the EU meet at the summit. Australian Prime Minister Morrison, South Korean President Moon, South African President Ramaphosa, and Indian PM Modi will attend as guests. The meeting will be President Biden and PM Suga’s first and probably Chancellor Merkel’s last summits.

The UK, as host for the summit, sets the agenda. According to their website, the summit will focus on:

Usually nothing concrete comes out of these summits, but there are press conferences and pledges on Sunday that can contain some market-sensitive information. Plus, there’s usually a photo of everyone wearing funny shirts. 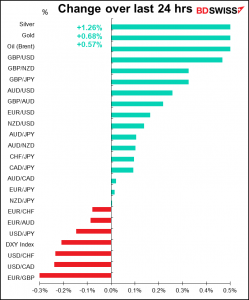