German Inflation Picks Up in June 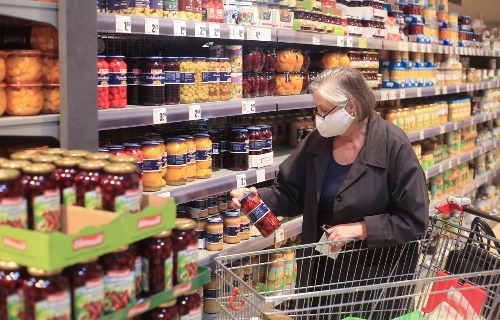 FILE PHOTO: An elderly woman wearing a face mask shops in a supermarket, after the federal state of North Rhine-Westphalia decided to make wearing protective masks obligatory in shops and public transportation to fight the spread of the coronavirus disease (COVID-19), in Bad Honnef near Bonn, Germany, April 27, 2020. REUTERS/Wolfgang Rattay/File Photo

German consumer prices, harmonised to make them comparable with inflation data from other European Union countries, rose by 0.8% year-on-year, compared with 0.5% in the previous month, the Federal Statistics Office said.

The reading compared with a Reuters forecast for 0.6%.

On the month, EU-harmonised prices rose 0.7% in June. A Reuters poll had predicted a rise of 0.4%.

The ECB has a target of keeping inflation close to but below 2% for the currency bloc.

ECB President Christine Lagarde said on Friday the euro zone is “probably past” the worst of the economic crisis caused by the coronavirus pandemic, but the recovery will be uneven.

In Germany, the government hopes its more than 130 billion euro ($146.68 billion) stimulus package will help bring the economy, Europe’s largest, back onto a growth path later this year.

The Ifo institute said last Wednesday German business morale posted its strongest rise in June since records began and the economy should return to growth in the third quarter after the coronavirus pandemic hammered output in the spring.