SYDNEY (Reuters) - Asian shares advanced for a second straight session on Monday, underpinned by coronavirus hopes after U.S. regulators authorised the use of blood plasma from recovered patients as a treatment option. 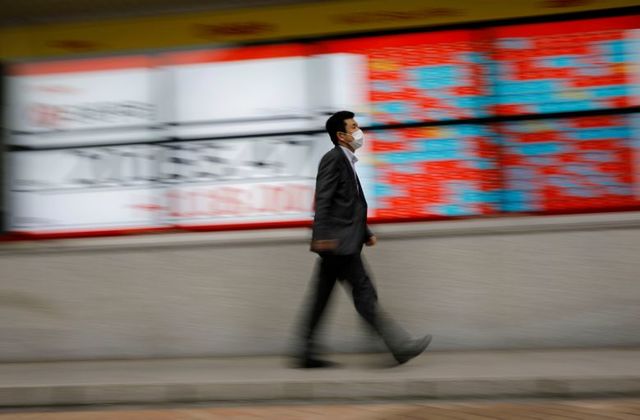 FILE PHOTO: A man wearing a protective face mask, following the coronavirus disease (COVID-19) outbreak, walks in front of a stock quotation board outside a brokerage in Tokyo, Japan, May 18, 2020. REUTERS/Kim Kyung-Hoon

The announcement from the U.S. Food & Drug Administration of a so-called “emergency use authorisation” came on the eve of the Republican National Convention, where Donald Trump will be nominated to lead his party for four more years.

E-Mini futures for the S&P500 gained 0.4%. European markets were also set for a leg higher with futures for Euro Stoxx 50 up 0.65% while those for Germany’s DAX and London’s FTSE added 0.6% each.

MSCI’s broadest index of Asia-Pacific shares outside of Japan jumped 0.8%, edging closer to a six-month high touched last week. Japan’s Nikkei reversed early losses to be last up 0.3%. Chinese shares rose too with the blue-chip CSI 300 index adding 0.8%. South Korea’s KOSPI, which has been on a slippery slope since hitting a more than two-year peak earlier this month, climbed 1%.

“Whenever there is any news that is seen as something that is helping the battle against coronavirus it gives a boost to sentiment,” said Shane Oliver, Sydney-based chief economist at AMP.

“It’s just hard to tell whether this will be a game changer. We still don’t know if it’s going to work,” he added, referring to the plasma treatment.

Equity market sentiment was also supported by a Financial Times report that the Trump administration is considering by-passing normal U.S. regulatory standards to fast-track an experimental coronavirus vaccine from the UK for use in America ahead of the presidential election.

Analysts urged caution with Wall Street indexes already at record highs even as the world economy struggled to recover from the once-in-a-century pandemic.

“With risks rising somewhat and September a full month for policy, the end of summer is a good time to cross-check valuations and to consider both threats and opportunities,” said JPMorgan cross asset analyst John Normand.

Normand pointed to talks of a U.S. fiscal package, Fed’s upcoming policy review next month and the ramping up of the U.S. election campaign as risk events over coming weeks.

Adding a layer of complication on Trump’s re-election campaign, White House adviser Kellyanne Conway on Sunday said she would leave the administration at the end of this month, leaving the president without one of his more passionate spokespersons.

Looming large over this week was a keenly anticipated address by Federal Reserve Chair Jerome Powell at the Kansas City Fed Jackson Hole symposium, where he will talk on the Fed’s monetary policy framework review.

The Fed’s July meeting minutes last week barely made a mention of its policy outlook while “failing to give succour to expectations” that its September meeting would reveal a formal commitment to new outcome-based’ forward guidance, Attrill added.

In currencies, the dollar was a shade weaker on the safe haven Japanese yen at 105.83.

The British pound nursed losses after falling 0.9% on Friday on lack of progress in post-Brexit trade talks with the European Union. It was last up a shade at $1.3100.

The euro was defensive at $1.1800 after falling 0.5% on Friday following disappointing manufacturing activity data.

That left the dollar index slightly lower at 93.193.