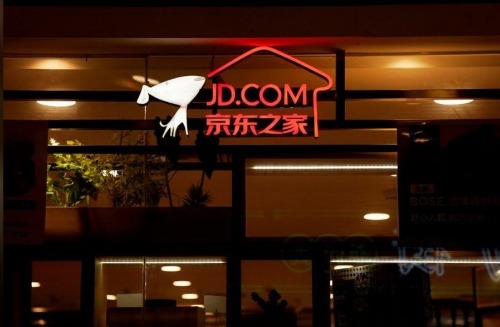 FILE PHOTO: A sign of China's e-commerce company JD.com is seen at its shop at a mall in Shanghai, China October 26, 2018. REUTERS/Aly Song
HONG KONG (Reuters) - Chinese e-commerce retailer JD.com is pressing ahead with plans for a secondary listing in Hong Kong within the next few months despite the coronavirus pandemic still roiling financial markets, said sources with direct knowledge of the matter.

The Nasdaq-listed company has confidentially made an application to the Hong Kong Stock Exchange to list as soon as June, in a deal that could raise at least $3 billion, which would be the largest equity capital market transaction in Hong Kong this year, they said.

A JD.com spokeswoman declined to comment. The sources did not want to be identified as the information has not been made public.

The company has appointed Bank of America, CLSA and UBS to lead the deal. The spokespeople of the three banks declined to comment on the confidential filings made by JD.com.

The Beijing-headquartered company has a $64 billion market capitalisation, according to Refinitiv data based on its most recent closing share price.

A secondary listing of the company would provide a boost for Hong Kong’s capital markets which have suffered a marked slowdown in big ticket deals since Alibaba’s $13 billion transaction in November last year.