A fairly typical “risk-off” day, with the commodity currencies losing ground and JPY & USD gaining. The anomalies were CHF, which performed poorly, and to some extent EUR, which didn’t fall as much as it might have vs the stronger dollar.

The decline of NZD and AUD that began during the Asian day yesterday continued throughout the day and those two currencies finished at the bottom of the table. (In case you don’t remember, the trigger was various moves by the NZ government to rein in soaring housing prices through regulatory measures, thereby making it unnecessary to raise rates to accomplish that goal.) However, they seem to be bottoming out.

Given their sharp decline yesterday and the surge in JPY, we might see some mean reversion today that could result in a noticeably higher NZD/JPY and AUD/JPY. There was an unusual amount of AUD/JPY activity yesterday, according to CLS, an FX broking firm. They said trading at 10:00 GMT yesterday was over 400% higher than usual for that hour.

EUR lost ground against the stronger dollar, but to be honest I would’ve expected it to fall even more. The market is focusing on the bungled rollout of the vaccines in Europe, and particularly the debate over the Oxford/AstraZeneca vaccine, which still hasn’t been 100% cleared in the US (Disclaimer: I’ve had one shot of it.) 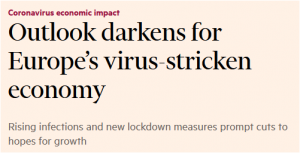 Several European countries are going back into partial lockdown as the dreaded “fourth wave” seems to be approaching. 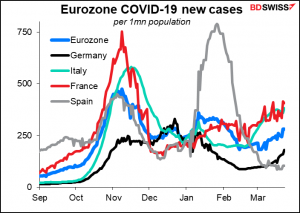 I think some of the strength in EUR could be in part a result of the decline of CHF. It was noticeable that although the safe-haven JPY and USD rose, the similarly placed CHF fell. I was discussing yesterday the possibility that the strength in CHF was just a result of the sudden unwinding of CHF/TRY carry trades and once that unwind was finished, CHF might go back to its recent weakening trend. Seems like that happened. Perhaps people saw the higher CHF as a good entry point for a long EUR/CHF position.

Fears over the outlook for demand, plus a higher-than-expected rise in US oil inventories according to the American Petroleum Institute (API) weekly data ( 2.9mn bbls vs 1.35mn expected) sent oil prices sharply lower (Brent -5.0%). 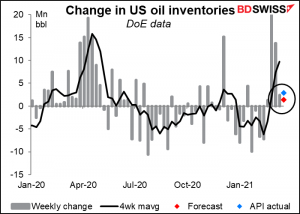 Oil is starting to recover a bit thanks to a container ship lodged in the Suez Canal. About 10% of global seaborne oil passes through the canal. This should be fixed pretty quickly though, so I doubt if it will have much lasting impact. 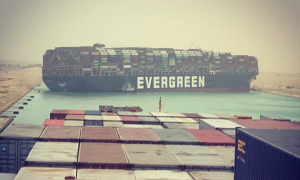 Fed Chair Powell and Treasury Secretary Yellen’s testimony to the House had few surprises but did include some worthwhile insights, nonetheless. As usual, both officials emphasized the importance of maintaining both fiscal and monetary support until employment had recovered. Chair Powell repeated that anticipated near-term price pressures were expected to be “neither particularly large nor persistent” in the face of longer-term global dis-inflationary pressures. “We have been living in a world of strong disinflationary pressures – around the world really – for a quarter of a century…We don’t think a one-time surge in spending leading to temporary price increases would disrupt that,” he said.

This seems to be the growing consensus in the financial markets, as the shorter (5-year) US breakeven inflation rates have been coming down recently even as long-term breakevens remain elevated. 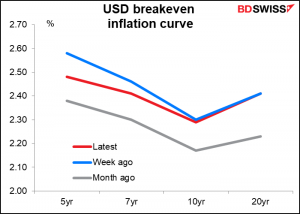 On the other hand, ten-year inflation expectations have risen to the highest they’ve been since 2013, perhaps an acknowledgment of the Fed’s new average inflation targeting framework, which calls for a temporary overshoot of the 2% inflation target after a period of undershooting. 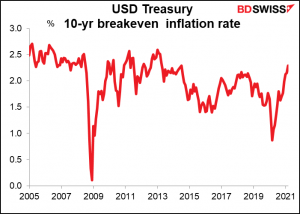 Just FYI: yesterday was the one-year anniversary of the Covid-19 lows in global equity markets, back when the S&P 500 closed down 34% from the record high that it had made less than a month earlier (Feb. 19th). The market is up 74.4% from that low, the largest 12-month gain since 1936. 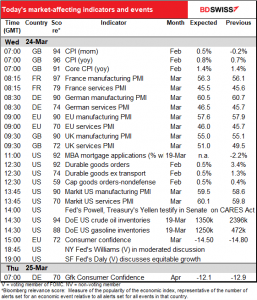 It’s preliminary PMI day! The preliminary purchasing managers’ indices (PMIs) from the major industrial countries – Japan, France, Germany, the EU as a whole, and the US – are out today.
We’ve already had the Japanese PMIs, which improved on both counts – manufacturing and service-sector, although the progress in the service sector was painfully small. 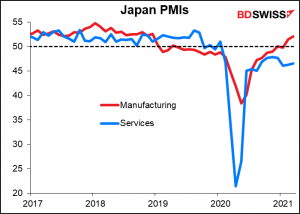 So now, we wait for the others.

In manufacturing, the market is looking for a small decline in Europe and the UK but a substantial rise in the US. Since the manufacturing PMIs are already at fairly high level, I don’t think these small declines will be significant. However, the large rise in the US could be if it reinforces the view that demand is heating up in the US, which could bring higher inflation.

In the service sector, the more troubled part of the economy, the outlook is better. Most of the areas for which forecasts are available are expected to show a rise, except for beleaguered France. That’s impressive considering the lockdowns in many places. The UK in particular is forecast to return to above the 50 “boom-or-bust” line, which could be a big positive for GBP. The US is forecast to rise further from its exceptionally high level. 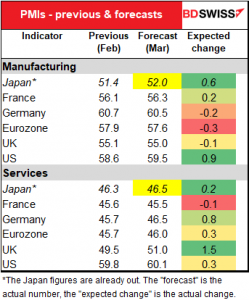 US durable goods orders are expected to rise further even after the unusually large increase in January. The figures point to another strong quarter for business investment, which should be good for stocks if not for the dollar. 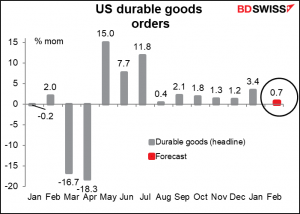 If the consensus forecast is correct, the level of orders will be some 6% above pre-pandemic levels, which is quite an achievement. 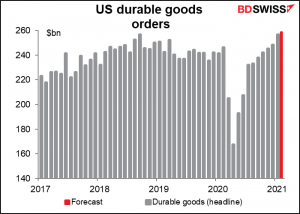 If we look at the figure excluding transportation equipment (planes haven’t been a big seller recently), the figure is nothing short of astonishing. It speaks to the rebound in manufacturing in the US. 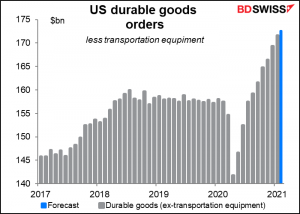 Having testified yesterday to the House Finance Committee, Fed Chair Powell and Treasury Secretary Yellen will testify again about the CARES Act, this time to the Senate Banking Committee. Maybe there will be some slightly different questions that will elicit slightly different answers – it happens.

Eurozone consumer confidence is expected to stay within the recent range. All things considered that’s not too bad, considering how several countries have gone back into lockdown. My guess is that pessimism about the current sad state of affairs with the pandemic and the bungled vaccine rollout is being balanced by hopes for the future. 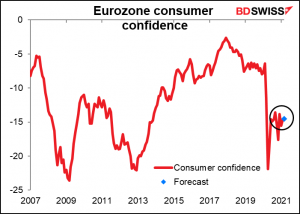 That’s for March. Early tomorrow morning, we get the German GfK consumer confidence for April. This index, which for a few years there held the record for World’s Most Boring Economic Indicator, has fluctuated recently with the waves of the pandemic. This month it’s expected to be up a bit but nothing significant, reflecting one assumes the “third wave” (or is it fourth?) hitting Germany nowadays. 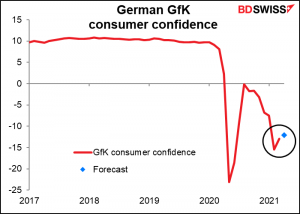 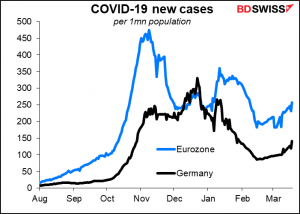 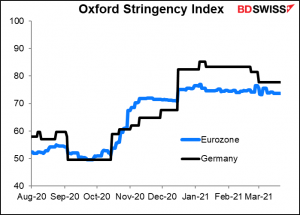 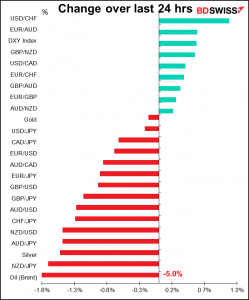