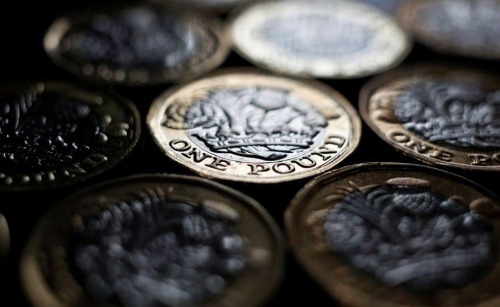 LONDON (Reuters) - The pound was neutral on Thursday and remained driven by global risk appetite, as well as by the fact that Britain seems to lag its European counterparts in planning to ease the lockdown restrictions imposed to fight the nover coronavirus.

The number could be even higher, some experts say. Figures for the number of excess deaths in Britain as a result of the coronavirus will provide a clearer picture of the impact of the COVID-19 pandemic but might not be available for a while, England’s deputy chief medical officer said on Wednesday.

Britain, which is expected to have one of the worst coronavirus death tolls in Europe, has said it is too early to talk of easing the lockdown and that it will not review social distancing guidelines until May 7.

“Supportive risk sentiment should put a downward pressure on EUR/GBP, with the cross continuing testing the 0.8700 level,” said ING analysts in a note to clients.

One way to ease the lockdown measurements would be to introduce a contract-tracing app or have enough people tested to separate those who have the disease from those who are healthy.

The could be ready in two to three weeks, a senior official said on Tuesday. But the UK could miss its target of carrying out 100,000 coronavirus tests a day by the end of April, Justice Minister Robert Buckland said on Thursday.

British businesses should not ignore the lockdown rules for pubs and restaurants to stay closed, Britain’s justice minister, Robert Buckland, said on Thursday, when asked about a plan by JD Wetherspoon to start reopening in or around June.