The volatile Treasury market continues to set the pace for other markets. You can see just how volatile it is from the graph, which shows the recent surge in the MOVE index. The MOVE index is like the better-known VIX index of stock market volatility but for bonds; it tracks the movement in US Treasury yield volatility implied by current prices of options on Treasury bonds.

By comparison, volatility in the stock market is about normal for the period under examination and for the FX market it’s a bit below normal. 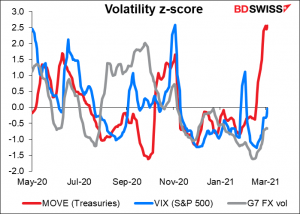 Yields in most of the major bond markets were higher yesterday, led by Britain after Chancellor Sunak announced an expansionary budget. 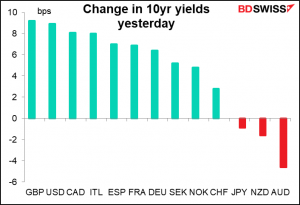 Sunak came through with what the FT described as a “spend now, tax later Budget to kickstart UK economy.” Over the next two years he will spend GBP 65bn more than estimated back in November in supporting jobs, investment, and the recovery, for example by extending job furlough schemes and tax breaks until the end of September instead of allowing them to end in the next few months as scheduled. But that will be followed by GBP 25bn a year of corporate tax and income tax rises by the middle of the decade, including the first rise in corporate taxes since 1974.

The increase in borrowing pushed up gilts yields and supported the pound. Nonetheless, I think cable’s inability to regain the 1.40 level after this better-than-expected news is worrisome. If this can’t push it back above 1.40, what will? The economic indicators are still surprising on the upside, but less and less. 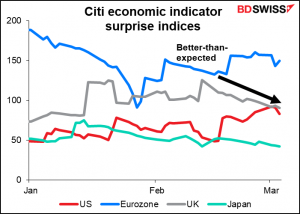 US Treasuries also suffered another big selloff as both real rates and inflation expectations rose. Ten-year yields rose 8.9bps to 1.48%, the third-biggest daily rise this year. The move was driven mostly by real rates ( 6.6bps), although inflation expectations also increased ( 2.5bps). The five-year breakeven inflation rate moved above 2.5% for the first time since 2008 before closing just beneath that point at 2.487%. 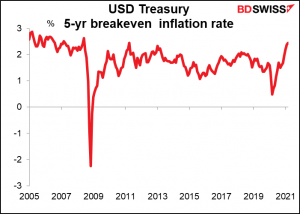 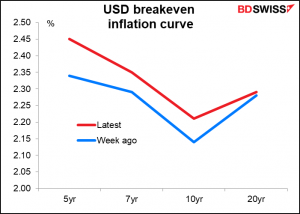 The story of the markets nowadays is the conflict between the recovery/liquidity narrative and the inflation/higher rates narrative. The strong recovery boosted by continued loose liquidity from central banks is good for risk assets, but higher inflation that results in higher yields is bad. The tug-of-war as one day one narrative dominates and the next day the other is likely to keep markets volatile. Although central bankers have been relatively sanguine recently about the higher yields, I would expect them to step in with at least verbal intervention if the rise in yields risks choking off the recovery prematurely. That’s why I expect the recovery/liquidity narrative to win and the commodity currencies to benefit.

It was noticeable that in this general “risk-off” environment, with the dollar benefiting from higher yields, CHF was right down there among the commodity currencies losing value. The failure of CHF to rally on such a day suggests to me that the market view of the currency has indeed shifted. 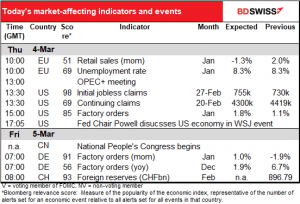 Big day ahead of us today, with an OPEC meeting, the weekly US jobless claims, and a speech by Fed Chair Powell. Plus overnight China’s National People’s Congress begins.

I discussed the OPEC meeting at some length in my Weekly Outlook, so I won’t repeat everything here. In short, they have to decide whether to restore as much as 500k barrels a day (b/d) of production in April, as they’re scheduled to do. At the same time, all eyes will be on Saudi Arabia to see what it will do with regards to its decision to cut production by 1mn b/d this month and next. The Saudi decision was not formally tied in with the group’s decisions, but it allowed them to increase production on schedule from January while still supporting oil prices.

The market had been expecting that with prices where they are now, both restraints would be lifted, which would obviously mean a 1.5mn b/d increase in oil output. However yesterday Reuters reported that the group is “considering rolling over production cuts into April instead of raising output as a recovery in oil demand remains fragile due to the coronavirus crisis.” As for Saudi Arabia’s voluntary production cuts, the report said it wasn’t clear what the Kingdom would do – meaning there’s a chance that they might keep them in place.

A ministerial panel meeting ended on Wednesday without making any policy recommendations.

Oil prices rallied yesterday on expectations that they’ll keep output unchanged, so if the report turns out to be wrong and they do increase production, that’s likely to hit oil and CAD. Conversely, I doubt if the market has 100% priced in a continuation of their output cuts and so we could see a further rally in oil and CAD after the meeting if they do decide to roll over the production cuts. 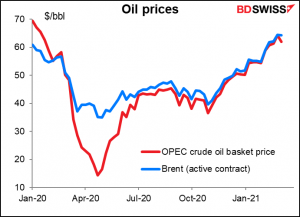 As for Fed Chair Powell, he will be engaged in a Conversation on the US Economy at The Wall Street Journal Jobs Summit. You can listen to him speaking at the Jobs Summit’s website. The key thing is what he says about the recent rise in bond yields. Chicago Fed President Evans (V) yesterday attributed the rise in yields to “real factors,” including the progress on US vaccination efforts. This echoes what Powell expressed a few days ago, that the rise in yields is healthy it’s a vote of confidence in the economy.

The question is, will he still say that now that the market is repricing the likely course of Fed policy? 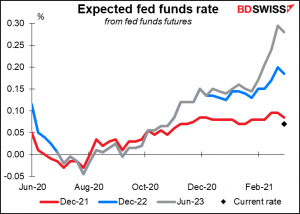 Philadelphia Fed President Harker (NV) yesterday said “toward the latter end of 2023” is the earliest he could see a rate hike, although the market is now pricing in one sometime in the first half of the year. Both Evans and Harker noted that yield-curve control (YCC) is a potential tool in the Fed’s toolkit but it is not yet planning to use it. Another idea frequently floated is a “twist,” where the Fed buys more long-term bonds and fewer short-term T-bills, thereby flattening the yield curve. But Evans didn’t agree with this idea, saying he doesn’t “expect we’ll need to change duration of bond buys.”

These views are all well and good, but the market will want to hear what The Chair has to say about all this. It will be the last big Fed speech before the blackout period begins on Saturday ahead of the March 17th FOMC meeting.

The US initial jobless claims come a day after a disappointing ADP report, with jobs rising by only 117k rather than the 205k expected. Unusually, the market expects a small ( 20k) rise in the number of jobless claims this week. As I remember, most weeks the forecast is for a small fall. I think a rise in claims would “catch the eye” of investors, especially in light of Fed officials’ recent focus on the labor market rather than inflation as the main metric that they’re concerned about. US yields could fall and fed funds expectations decline, which oddly enough would probably encourage stocks in the ol’ “bad news is good news” fashion. The combination of lower yields and higher stocks would most likely be negative for the dollar. 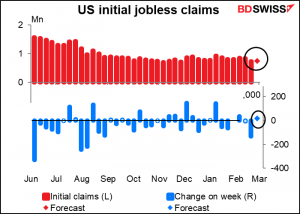 Continuing claims are expected to be down by 119k. 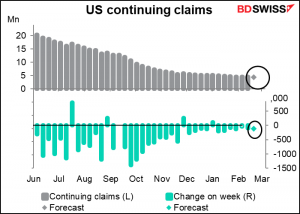 US factory orders are expected to be up a strong 2.1% mom, which would bring them to 1.6% above the pre-pandemic level. This follows a large 3.4% mom surge in durable goods orders during the month, the biggest increase in six months, as aircraft and defense orders rose. 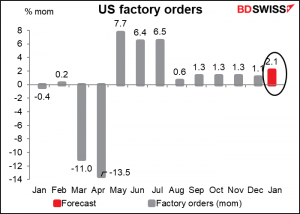 Then tomorrow morning, bright and early, we get German factory orders. I find this a more exciting indicator, as it’s a leading indicator of Friday’s German industrial production, whereas US factory orders are mostly a function of the already-released durable goods orders.

German factory orders have recovered nicely. They’re expected to be up a relatively modest 0.5% mom, which is disappointing as it follows a fall. Still, on this forecast they’d be 2.5% above the Jan/Feb 2020 level and 3.9% above the 2019 average, so still at a fairly robust level. 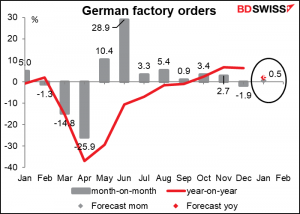 Also, Swiss foreign exchange reserves are due out, but my research suggests that the weekly sight deposits are a better indication of Swiss National Bank intervention than the reserve numbers. That’s because the reserves are in different currencies and so are affected by valuation changes, whereas the sight deposits are all in CHF and therefore more consistent over time. 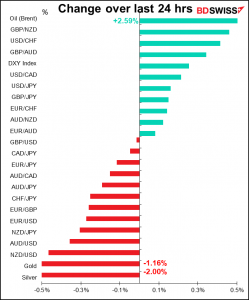