(Reuters) - U.S. stocks rose on Friday and the Nasdaq posted its sixth record closing high in seven days as a positive analysis on Gilead Sciences Inc’s antiviral drug to treat COVID-19 soothed investor worries over a record rise in coronavirus cases in the United States. 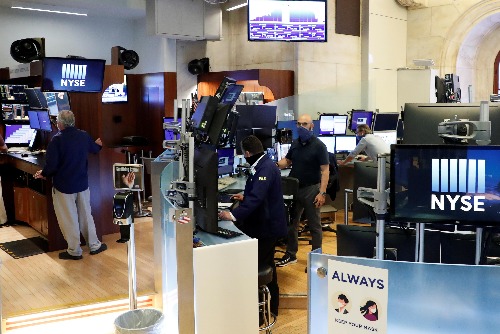 FILE PHOTO: Traders wear masks as they work on the floor of the New York Stock Exchange as the outbreak of the coronavirus disease (COVID-19) continues in the Manhattan borough of New York, U.S., May 28, 2020. REUTERS/Lucas Jackson

The United States registered the largest single-day increase in new COVID-19 infections globally for the second day in a row on Thursday, forcing Americans to take new precautions. Several states have already backpedaled on reopening plans.

Gilead’s remdesivir significantly improved clinical recovery and reduced the risk of death in COVID-19 patients, additional data from a late-stage study showed. The drugmaker’s shares climbed as it said the finding required confirmation in clinical trials.

“That kind of dampened some of the concern that’s been building over the past few days around the increased virus cases in the southern states,” said Charlie Ripley, senior investment strategist for Allianz Investment Management in Minneapolis.

Although the Nasdaq recorded another record closing high, it underperformed the Dow and S&P 500, in a reversal of the recent trend.

“We’re seeing I think some rotation from winners into the laggards here today. And we’ve seen that gap widen quite a bit between the leaders and laggards over the last week, so I think it makes sense there’s a little profit-taking in that trade especially heading into earnings season,” said Rob Haworth, senior investment strategist at U.S. Bank Wealth Management in Seattle.

Bank of America Corp, Citigroup Inc, JPMorgan Chase & Co and Goldman Sachs rose ahead of their financial results next week, which would mark the onset of the second-quarter earnings season.

Overall profits for S&P 500 companies are expected to have fallen the most in the second quarter since the financial crisis, according to IBES data from Refinitiv.

A slate of economic data, including a record monthly payrolls addition, has pointed to a revival in business activity in June, fueling the U.S. stock market’s stimulus-driven rally.

Carnival Corp jumped after the cruise line operator said it was planning to resume operations in a phased manner and would operate with a smaller fleet on its return.