Oil futures wavered between losses and gains on Monday, as a second-straight weekly rise in the U.S. oil-rig count pointed to a possible uptick in production.

Recently weak economic data and the coming Brexit vote in the U.K. and Federal Reserve meeting on monetary policy also raised concerns about a potential slowdown in crude demand, but a decline in the U.S. dollar offered some support for dollar-denominated oil prices.

Baker Hughes Inc. said late Friday the number of rigs drilling for oil in the U.S. rose by three in the week ended June 10, the second straight weekly increase.

"While the actual increase is minuscule compared to the 1,000 rigs that have come offline in the past 18 months, it allows for speculation about the stabilization of U.S. crude production and the potential rebound," said Daniel Holder, commodity analyst at Schneider Electric. "The market since Thursday has taken this speculation as bearish, since the oversupplied global market will take longer to rebalance if U.S. shale production returns."

The U.S. Energy Information Administration will release its monthly update on U.S. shale output later Monday. Last month, it forecast a decline of 113,000 barrels a day to about 4.8 million barrels a day in June.

"There signs that U.S. oil producers are beginning to drill for crude again now that prices have recovered to around $50 a barrel," said Fawad Razaqzada, chief technical analyst at Forex.com and City Index, referring to the latest rig-count data.

"This is something that we have repeatedly warned about in recent weeks as oil prices surged higher," he said in a note Monday. "Although the oil rally could still go north of $60 and reach even $70, this serves as a reminder that the global supply glut is unlikely to be eradicated completely any time soon."

Oil prices have also suffered on the back of "risk aversion," said Razaqzada.

He said that investors are "spooked about the prospects of a U.K. exit from the [European Union], the economic impact of a potential U.S. rate rise this summer, and renewed demand concerns out of China."

The Fed will issue a statement on monetary policy on Wednesday. The U.K., meanwhile, will hold a Brexit vote on June 23.

Changes in the interest rates have an impact on the U.S. dollar, and thus also on dollar-denominated commodities such as oil. On Monday, the ICE U.S. Dollar Index inched lower, providing support for oil.

On the New York Mercantile Exchange, July West Texas Intermediate crude edged up by 2 cents to $49.09 a barrel following a gain of roughly 0.9% last week.

August Brent crude fell 3 cents to trade at $50.57 a barrel on London's ICE Futures exchange, after briefly falling below $50 a barrel for the first time in a week. 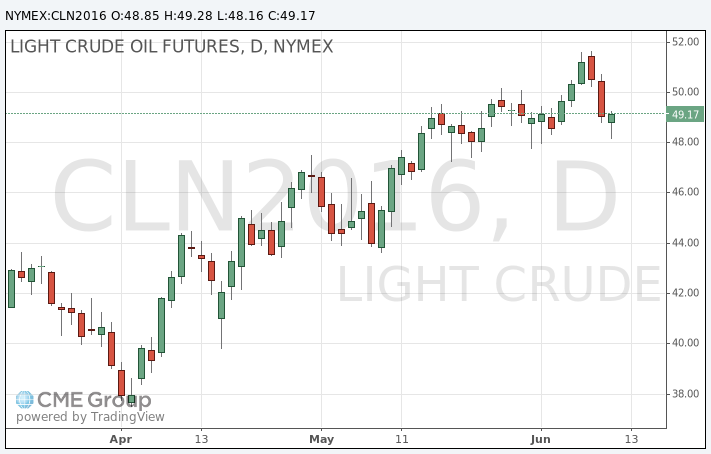