Euro area business activity growth slowed slightly in June, according to the Markit Eurozone Flash PMI , which edged down to its lowest level since January of last year. The PMI fell from 53.1 in May to 52.8, rounding off the worst calendar quarter since the fourth quarter of 2014 amid signs of political and economic uncertainty dampening business activity. Moderate growth was recorded in both the manufacturing and service sectors, though an acceleration in the rate of goods production, to the best seen so far this year, was offset by a weakened pace of expansion in services, the slowest for 18 months.

Growth of new orders likewise accelerated in manufacturing, buoyed by the best export performance since December, but slowed in services. Overall growth of new business across both sectors consequently inched only slightly higher, remaining one of the weakest seen over the past year-and-a-half. Backlogs of work nevertheless rose to the greatest extent seen over the past nine months, prompting firms to take on additional staff at the fastest rate seen so far this year in order to expand capacity to meet demand. Stronger rates of job creation were seen in both manufacturing and services. 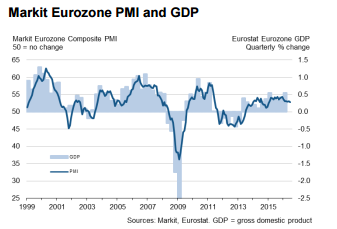