After decreasing in February and March, real gross domestic product edged up 0.1% in April. Widespread gains, notably in manufacturing, utilities and the public sector, were largely offset by a significant decline in non-conventional oil extraction.

Service-producing industries rose 0.2% in April, after being essentially unchanged in March. Notable gains were posted by the public sector (education, health and public administration combined), the finance and insurance sector, and wholesale and retail trade. In contrast, the arts, entertainment and recreation sector notably declined.

The output of goods-producing industries edged down 0.1% in April, mainly as a result of a decrease in mining, quarrying, and oil and gas extraction. Manufacturing and utilities posted notable increases, while the agriculture and forestry sector was down.

Mining, quarrying, and oil and gas extraction fell for a third consecutive month in April, declining 1.4%. 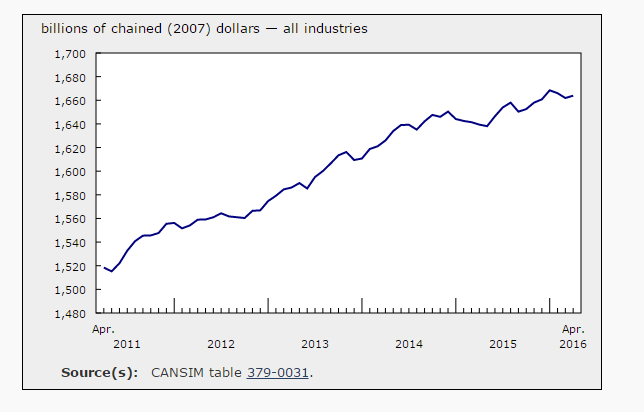