The MNI Chicago Business Barometer rose 7.5 points to 56.8 in June from 49.3 in May, the highest since January 2015, led by strong gains in New Orders and Production. June's rebound was just enough to offset the previous two months of weakness, leaving the Barometer broadly unchanged over the quarter at an average of 52.2 in Q2 compared with 52.3 in Q1. 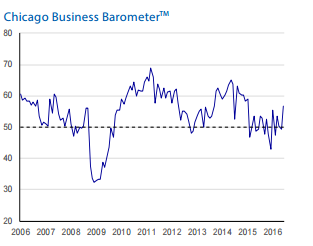