Oil prices have decreased today while investors are closely watching the Brexit uncertainties.

Earlier today, the former mayor of London, Boris Johnson, suddenly abandoned the race for the post of the next prime minister of Great Britain, which was another surprise against the backdrop of a faltering political stability in the country after the last week's vote.

Meanwhile on Thursday, Justice Minister Michael Gove, one of the main instigators of Brexit, said he intends to become prime minister. Interior Minister Theresa May, primarily in favor of keeping membership in the EU, announced that enter into the struggle for the post of leader of the ruling Conservative Party.

A day earlier, prices in New York WTI for August delivery rose $ 2.03, or 4.24%, showing the largest gain since April, after the weekly statistics showed a sharp decline in US crude inventories last week, while oil production rate continued to decline.

According to the US Energy Information Administration, the total crude oil inventories fell last week by 4.1 million barrels to 526.6 million, compared with expectations of a reduction of 2.4 million barrels.

At the same time, the volume of daily oil production in the US as of last week was 8.62 million barrels, compared with a peak of more than 9.6 million barrels last year.

Fears of a sharp reduction in production due to the impending strike in Norway's oil sector eased as the volume of supplies from the main producer in the North Sea will be reduced by only 7% in the case of the start of the strike, according to the Norwegian Petroleum Directorate.

About 755 workers at seven oil and gas fields are planning to go on strike from Saturday, if before the deadline on Friday is not reached a new agreement on wages.

The cost of the August futures for US light crude oil WTI fell to 48.56 dollars per barrel.

The price of August futures for Brent fell to 49.95 dollars a barrel on the London Stock Exchange ICE Futures Europe. 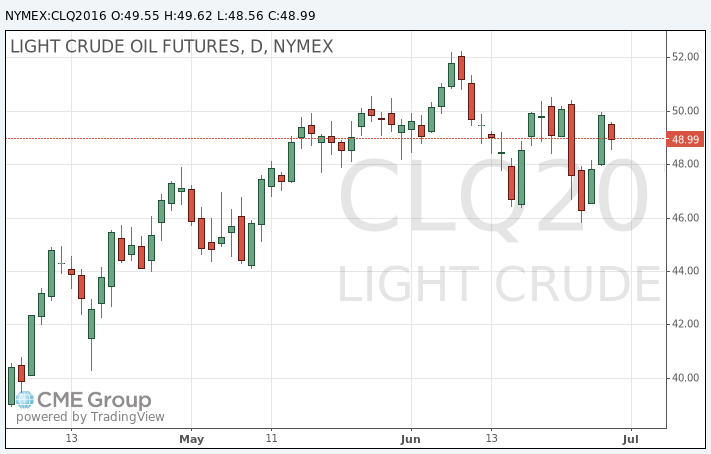