The large-cap stocks fell by 0.35 %, as measured by the WIG30 Index. In the index basket, coking coal miner JSW (WSE: JSW) posted the sharpest decline of 7.75%, dragged down by the announcement the company will sell its WZK Victoria mine for PLN 350 mln ($88 mln) as it continues to struggle with falling coal prices. The other notable losers were FMCG-wholesaler EUROCASH (WSE: EUR), clothing retailer LPP (WSE: LPP) and property developer GTC (WSE: GTC), which plunged by 3.96%, 2.63% and 2.21% respectively. On the other side of the ledger, oil and gas producer PGNIG (WSE: PGN) led the gainers, rising 3.7%. It was followed by genco TAURON PE (WSE: TPE) and IT-company ASSECO POLAND (WSE: ACP), advancing by 2.16% and 1.54% respectively. 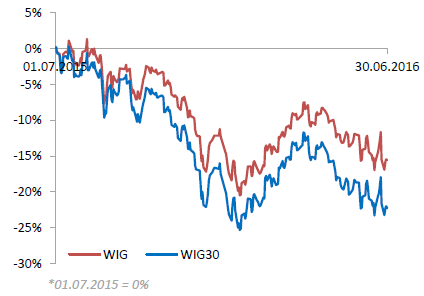