01.07.2016 08:07 The recovery in the eurozone manufacturing sector gathered momentum in June

The recovery in the eurozone manufacturing sector gathered momentum in June

Growth of both production and new orders accelerated to the fastest in the year so far, taking the respective rates of expansion during the second quarter as a whole a tick above those achieved in quarter one. The final Markit Eurozone Manufacturing PMI® posted a six-month high of 52.8 in June, up from 51.5 in May and above the earlier flash estimate of 52.6. Growth was led by a resurgent Germany and Austria, where the rates of expansion accelerated to the fastest since February 2014 and May 2011 respectively. Upturns in Italy, Spain and Ireland also gathered pace, but slowed in the Netherlands. The Greek PMI moved back into expansion territory for the first time in six months, posting a 25-month peak of 50.4. The only nation to signal contraction was France. Moreover, the gap between the French and German PMI readings (6.2 points) was at its widest since the start of 2014. 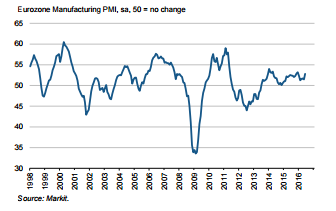