German manufacturers reported their best performance since February 2014 at the end of the second quarter, with the seasonally adjusted final Markit/BME Germany Manufacturing Purchasing Managers' Index (PMI) - a single-figure snapshot of the performance of the manufacturing economy - rising from May's 52.1 to 54.5 in June. This was up marginally from an earlier 'flash' estimate of 54.4. Moreover, business conditions have now improved in each of the past 19 months. Particularly positive contributions to the PMI came from the new orders, output and employment indices. June data highlighted solid growth of production at German manufacturers, with the respective rate of expansion the fastest in over two years. In line with the trend for output, companies reported a sharp rise in the level of new work received during the month. Anecdotal evidence suggested that favourable economic conditions supported growth at the end of the second quarter. Moreover, panellists also commented on stronger demand from foreign markets, with China and the US specifically mentioned as sources of export growth. Although rising demand was partly satisfied by a reduction in post-production inventories, backlogs of work accumulated further during June. The rate of increase accelerated since the previous month and was the most marked in 2016 so far - said Markit. 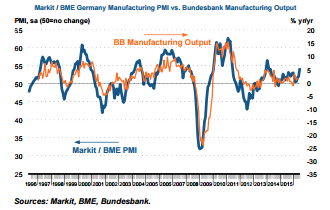