June saw a modest improvement in the performance of the UK manufacturing sector. The seasonally adjusted Markit/CIPS Purchasing Managers' Index (PMI) posted 52.1, up from a revised reading of 50.4 in May, its highest level since January. It should be noted that the data collection window for this month's survey was between the 13th and 27th June. Almost all of the responses included in the final index readings were received prior to the end of 23rd June (the day of the UK's EU referendum). June data signalled a faster rate of increase in UK manufacturing production, underpinned by a solid acceleration in inflows of new work. New orders rose at the quickest pace since last October, reflecting the ongoing strength of the domestic market and a marginal uptick in new export business. 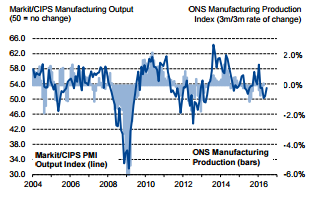