U.S. manufacturers indicated a slight rebound in production volumes during June, helped by the fastest rise in new work since March. However, the latest survey signalled that growth momentum remained relatively subdued in comparison to its post-crisis trend, which contributed to cautious job hiring and further efforts to reduce inventories in June. The seasonally adjusted final Markit U.S. Manufacturing Purchasing Managers' Index (PMI) registered 51.3 in June, up from 50.7 in May and the highest reading for three months. The earlier 'flash' reading for June was 51.4. Higher levels of production, new orders and employment all helped to boost the headline index, while an accelerated fall in stocks of purchases was the only negative influence. June data signalled a marginal expansion of manufacturing output, following the decline recorded during the previous month. Greater production volumes reflected a sustained upturn in new business intakes. Although still weaker than the longrun survey average, the latest rise in new orders was the fastest since March. Reports from survey respondents suggested that heightened economic uncertainty and delayed decision making ahead of the presidential election had acted as a brake on client demand. A rebound in export sales provided a boost to manufacturers' workloads in June. Moreover, the increase in new orders from abroad was the fastest since September 2014. This contributed to an upturn in backlogs of work across the manufacturing sector for the first time since the start of 2016. 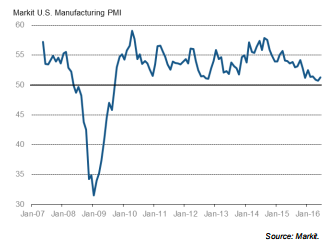