Gold price rose as weak economic data in China and the effects of Brexit increased demand for the metal as a safe-haven asset.

The official Chinese purchasing managers' index for the production sector in June fell to 50.0, while the previous three months, the index was above 50, indicating a growth of activity in the sector. Managers' Index Caixin in June was 48.6 against 49.2 in May, demonstrating the most significant drop in 4 months.

In addition, concerns about the political and economic uncertainty after the British decision to withdraw from the European Union continues to strengthen demand for gold.

Data for the Chinese manufacturing industry, published on Friday, strengthened the feeling that the prospects for global economic growth are deteriorating, said Matthew Turner, analyst at Macquarie. The deterioration in the global economy makes it less likely the Fed raising interest rates in the coming months, traders believe.

"After the British referendum, taking into account some not very positive economic data, observers expect a longer maintenance of low interest rates, and this is positive for the precious metals," - Turner said.

Over the past six months the price of gold showed the most significant growth since 2007, amid doubts about the sustainability of the global economy and in view of the negative interest rates in different countries. During this period, gold has risen in price in 2016 to 26%. 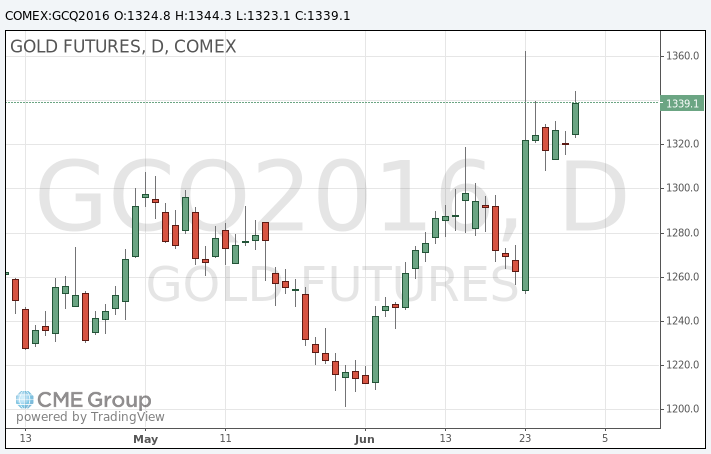