Faster rises in activity and new business helped lead to the sharpest increase in employment at Spanish service providers for almost nine years at the end of the second quarter. The rate of input cost inflation was unchanged from that seen in May, while output prices continued to rise marginally. The headline seasonally adjusted Business Activity Index rose to 56.0 in June from 55.4 in the previous month, signalling a sharp monthly expansion of business activity, and the fastest since last November. Growth of activity has now been recorded in each of the past 32 months. Five of the six monitored sectors registered higher activity, the exception being 'Other Services'. The Post & Telecommunications category recorded the fastest rise in output, a picture matched in terms of new business and employment. Some respondents indicated that improving client demand had led their activity to rise. Supporting this evidence was a marked increase in new business, the sharpest in seven months. A number of panellists indicated that successful marketing campaigns had contributed to rising new orders. 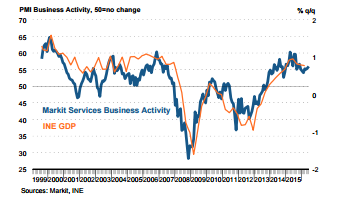