June saw the growth rate of eurozone economic output hold steady at a moderate pace. After rising slightly from the earlier flash estimate of 52.8, the final Markit Eurozone PMI Composite Output Index posted 53.1, unchanged from May. This left the average reading for the headline index for the second quarter a shade below that for the opening quarter (53.1 versus 53.2) and at its lowest level since the final quarter of 2014.

Manufacturing production registered its fastest growth in the year so far in June, and outperformed the service sector for the first time in three months. Service sector activity rose at the slowest pace in almost one-and-a-half years. National PMI data indicated solid expansions in Germany, Italy, Spain and Ireland during June. Growth accelerated in the latter three and German output rose at a pace almost identical to May's fourmonth high. All of these nations scaled up activity in response to faster inflows of new business.

France remained well behind the rest of the pack in June, with French companies seeing output and new orders edge back into contraction territory. The downturn in manufacturing production continued, while the trend in service sector activity slid slightly below the stagnation mark. 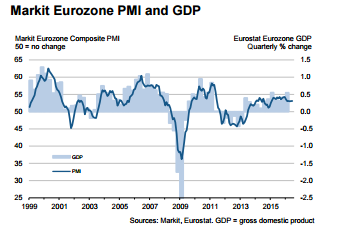