Growth of UK service sector activity weakened in June to match the 38-month low recorded in April, according to the latest PMI® survey data from Markit and CIPS. Growth over the second quarter as a whole was the weakest since the first quarter of 2013 when the current upturn began. Moreover, the 12-month outlook was the darkest since December 2012. Companies often reported that uncertainty linked to the EU referendum had weighed on workloads and incoming new business.

The data collection window for the June survey was 13-28 June, with 89% of responses received before 24 June. The headline figure for the survey is the seasonally adjusted Markit/CIPS UK Services Business Activity Index, a single-figure measure designed to track changes in total UK services activity compared with one month previously. Readings above 50.0 signal growth of activity compared with the previous month, and below 50.0 contraction.

The Business Activity Index fell from 53.5 in May to 52.3 in June, matching April's 38-month low and signalling a relatively weak rate of growth in UK services output. Activity has risen every month since January 2013, but the index averaged just 52.7 in the second quarter, the weakest of any quarter since Q1 2013. The index has averaged 55.2 since it was first compiled in July 1996. 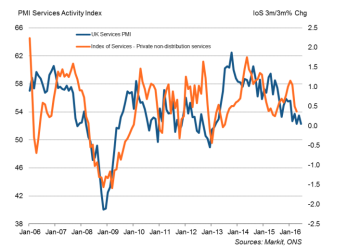