The large-cap stocks' measure, the WIG30 Index lost 1.58%. A majority of the index components recorded declines with bank MILLENNIUM (WSE: MIL) posting the biggest drop of 6.75%. Other noticeable losers were bank ALIOR (WSE: ALR), footwear retailer CCC (WSE: CCC) and railway freight transport operator PKP CARGO (WSE: PKP), which tumbled by 5.71%, 4% and 3.19% respectively. On the other side of the ledger, IT-company ASSECO POLAND (WSE: ACP) led a handful of gainers with a 1.71% advance, followed by genco ENEA (WSE: ENA) and videogame developer CD PROJEKT (WSE: CDR), which added 1.43% and 0.77% respectively. 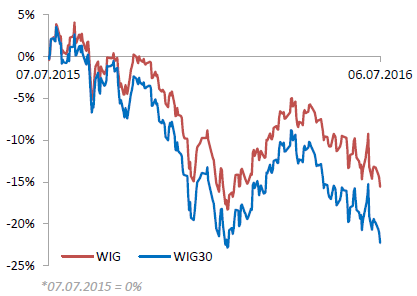