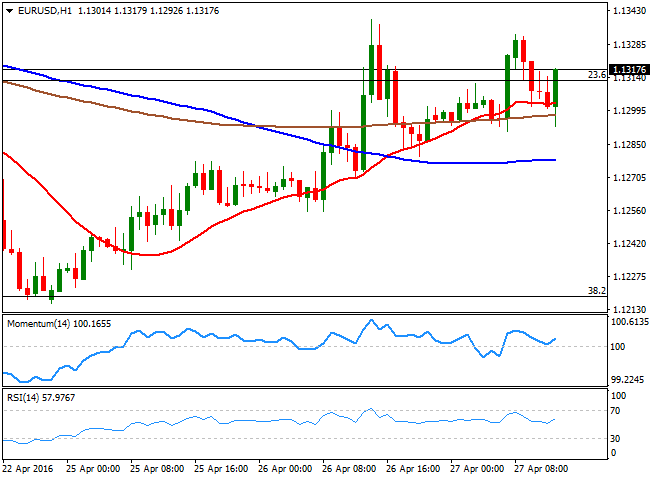 Majors are subject of choppy trading this Wednesday, with all eyes on the FED's economic policy decision later in the American afternoon, followed then by the RBNZ and the BOJ at the beginning of the Asian session. The EUR/USD pair eases from a daily high  set early Europe at 1.1332, but continues trading around the 1.1300 figure, supported by some positive data coming from German. The latest GFK survey shows that confidence among local consumers ticked higher for May, printing 9.7 against previous 9.4. Import prices in the country during March fell by less than expected, down by 5.9% compared to a year before, and up 0.7% monthly basis. The US will release some housing data right after Wall Street's opening, but the market will likely wait for the US Central Bank before taking some strong positions.

In the meantime, the EUR/USD pair 1 hour chart shows that the technical indicators have bounced from their mid-lines, whilst the price keeps hovering around a flat  20 SMA. In the 4 hours chart, the pair presents a bullish stance, with the price holding between moving averages, and the Momentum indicator resuming its advance well above the 100 level. At this point is all about the FED, and whether they decide to do on rates in the upcoming future. As hawkish the US Central Bank, the higher the chances of a dollar recovery.