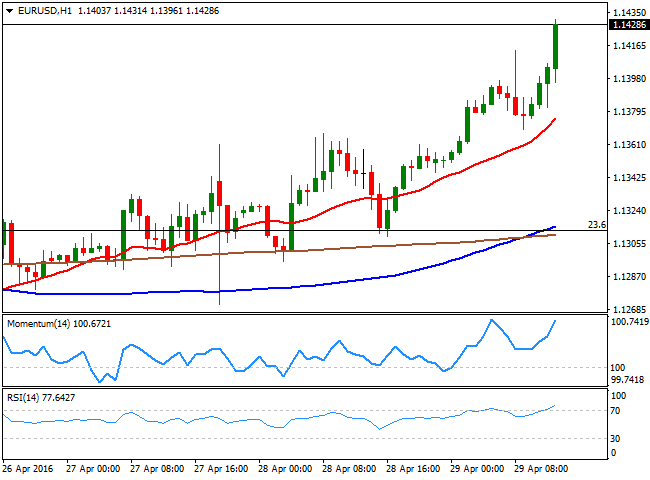 Dollar's selling mode continued during the first half of the day, as Asian shares plummeted, dragging the greenback alongside. The EUR/USD pair advanced up to 1.1413, but retreated towards the 1.1380 region, where it consolidated ahead of US data. In the EU, unemployment fell in March to 10.2%, the lowest rate recorded in the region since August 2011. Inflation, however, fell in the region according to April preliminary figures, down 0.2% compared to a year earlier, back in to deflationary territory. core inflation was 0.8% after resulting at  1.0% in March.

US data put the greenback under renewed selling pressure, as personal spending rose  less than expected, in March, up by just 0.1%, despite incomes increased 0.4%, suggesting consumers are  choosing to save their money. The employment cost index for the first quarter of this year came in at 0.6%, matching market's expectations.

The EUR/USD pair jumped beyond 1.1430, and is poised to extend its advance up to the major resistance at 1.1460, as in the 1 hour chart, the technical indicators have turned sharply higher whilst the price accelerated beyond a bullish 20 SMA. In the 4 hours chart, the technical indicators continue to lack upward momentum despite holding within positive territory, whilst the 20 SMA has crossed clearly above the 100 SMA well below the current level, also supporting some additional gains for this last day of the week.