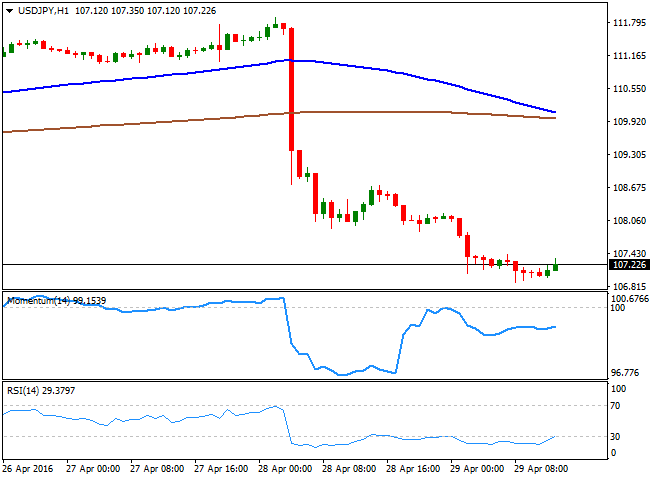 The USD/JPY pair plummeted to 106.89, its lowest since October 2014 during the Asian session, as the dollar remained weak after the release of poor GDP figures for the first quarter of 2016. The Nikkei plummeted on yen's strength, and European equities followed through, while US futures are poised to open lower, all of which should keep the yen supported. The risk of a BOJ's verbal intervention, however, is quite high. The pair bounced up to 107.35, but is currently retreating, as poor US data is not helping the greenback. Short term, the RSI indicator remains in oversold territory, whilst the Momentum indicator has stabilized below its 100 level, as the 100 and 200 SMA accelerate their declines well above the current level, all of which suggests some downward exhaustion but maintains the risk towards the downside. In the 4 hours chart, the technical indicators have lost bearish strength within extreme oversold territory, supporting some further consolidation before the next directional move.