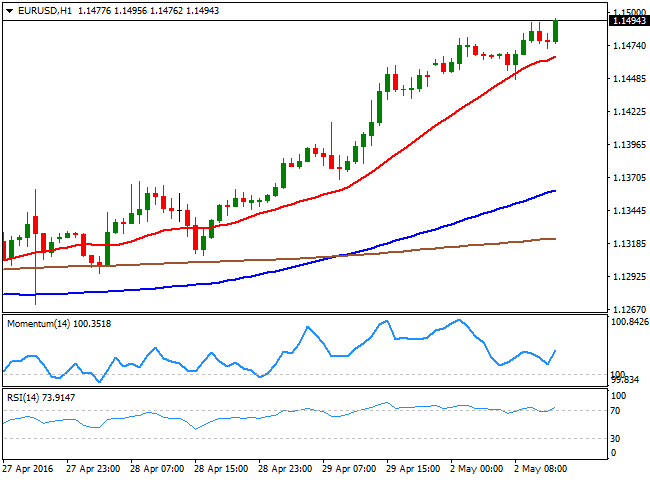 The American dollar extends its last week's slide across the board, with the common currency flirting with the 1.1500 region during the European morning. Majors however, remain within Friday's ranges in a so far, lackluster Monday. Data coming from Europe showed that the manufacturing sector posted a modest growth during April, as the final Markit manufacturing PMIs  ticked slightly higher in the EU and Germany, but fell in France. The US will release its own manufacturing figures after Wall Street's opening, expected below previous, something that will likely boost dollar's decline. In the meantime, the 1 hour chart for the EUR/USD pair shows that the RSI indicator has bounced from its 50 level and head north within overbought territory, whilst the Momentum indicator  also heads north above its mid-line. In the same chart, the 20 SMA stands now around 1.1465, the immediate support. In the 4 hours chart, the technical indicators also resumed their advances within overbought territory, whilst the 20 SMA has crossed above the 100 and 200 SMAs and heads strongly higher well below the current level, all of which supports some additional gains for the upcoming session.