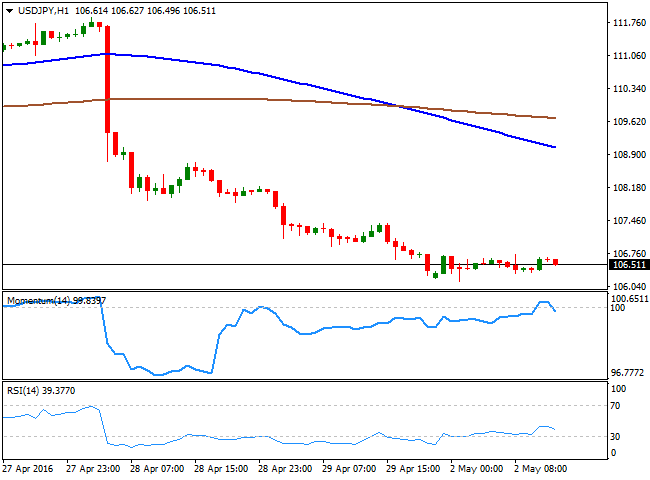 Consolidating  near 106.00, downward risk prevails. The USD/JPY  traded as low as 106.13, with the JPY paring gains after adding around 550 pips in the last two trading journeys. The release of the Nikkei Japanese manufacturing PMI for April at the beginning of the day showed that production in the country declined at its strongest pace in two years, coming in at 48.2, putting local share markets under pressure. So far, the daily high stands at 106.72, below the immediate short term resistance at 106.90. The technical picture is bearish, as in the 1 hour chart, the technical indicators have corrected oversold readings and turned south around their mid-lines, whilst the 100 SMA accelerated its decline and broke below the 200 SMA, in line with a continued decline. In the  4 hours chart, the RSI indicator has turned south around 26, whilst the Momentum has corrected extreme oversold readings, but stalled its recovery well below its 100 level, in line with the shorter term outlook.