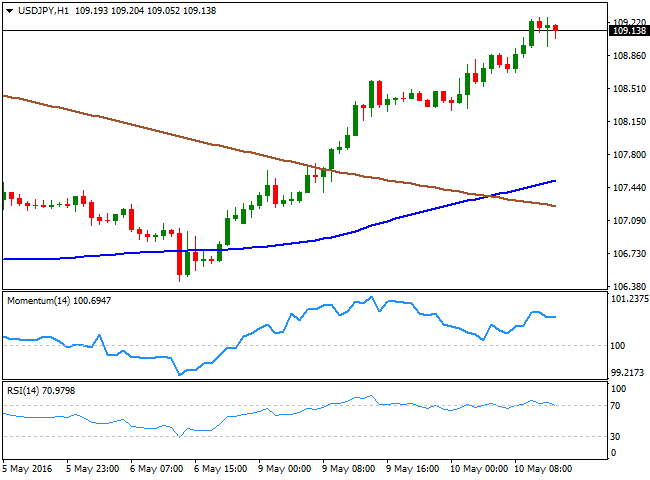 Bullish, 110.60 major target. The USD/JPY pair keeps rallying, and trades now above the 109.00 figure, helped by improved market's sentiment and continued dollar's strength. The Nikkei 225 advanced over 2.10%, keeping the local currency subdued, as in-line with expected Chinese inflation brought relief to local investors. The pair has traded as high as 109.27 so far today, and the 1 hour chart shows that the technical indicators are turning modestly lower from overbought territory, whilst the price remains well above its moving averages, with the 100 SMA advancing above the 200 SMA for the first time since late April, indicating the risk remains towards the upside. In the 4 hours chart, the technical indicators are also giving signs of upward exhaustion, with the pair now meeting short term buying interest around its 100 SMA, at 108.65. The rally may extend up to 110.60 during the upcoming days, and will take a break beyond this last to confirm a stronger advance of the USD in term.