EUR/USD Forecast: consolidating at lows ahead of US data

After a long weekend, volatility picked up in Asia, although the EUR/USD pair remains quietly consolidating within its latest range, a handful of pips above the 1.1100 figure. European equities opened with a soft tone, down modestly, although Asian shares are generally higher.

Germany released another batch of positive data, as the unemployment rate fell by more than expected, down to 6.1% from previous 6.2% in May whilst Retail Sales in April surged by 2.3% compared with a year before. Later on the day, the US will release its Personal Income and Spending data, the May Consumer Confidence, and the Chicago PMI, generally expected to show signs of improvement. 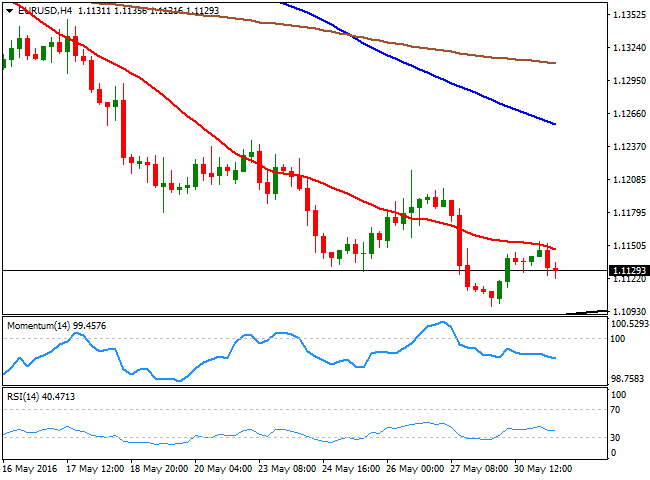 The EUR/USD pair 4 hours chart, shows that the bearish tone prevails, despite the absence of directional strength, as the price is being capped by a bearish 20 SMA, whilst the technical indicators head south below their mid-lines. A daily ascendant trend line coming from November 2015 monthly low, stands at 1.1090 today, and a break below it required to confirm additional declines, with the 1.1040/50 region as the first bearish target, followed later by the 1.1000 figure.

Given that the ECB will meet next Thursday and the US will release its Nonfarm Payroll report on Friday, seems unlikely that the pair will break further lower. To the upside, short term selling interest stands at 1.1150/60, so it will take a clear advance beyond this region to confirm a recovery up to 1.1200.