The EUR/USD pair trades near a fresh weekly high set at 1.1185 ahead of the US opening, with the greenback generally lower across the board. Yen's demand, as risk aversion kicked in late Tuesday, was the first catalyst for the current dollar's slide, alongside with some poor economic figures.  The idea that the US economic data is not offering enough background for a rate hike is gaining some ground, but there it has not been poor enough to deny it at the time being. The final revisions of May Manufacturing PMIs in the euro area came in mixed, with the EU reading steady at 51.5, while German figures were revised lower, to 52.1 from 52.4. 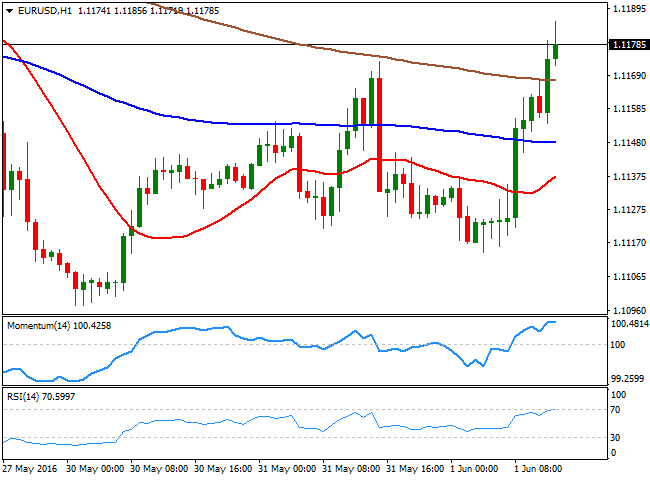 Ahead of US own manufacturing data, the short term picture for the EUR/USD pair is recovering towards the 1.1200 region, and in the 1 hour chart, the price has managed to advance above all of its moving averages that anyway lack clear directional strength, whilst the technical indicators are losing part of its upward strength near overbought readings, but far from suggesting a downward move. In the 4 hours chart, the price is advancing above a bearish 20 SMA whilst the technical indicators maintain tepid bullish slopes above their mid-lines, in line with the shorter term outlook.