NZD/USD continues to rally and today it managed to break above 0.7000. The pair peaked at 0.7022, hitting the strongest level since May 3. The pair remains near the highs but lost some bullish momentum during the last hour as the US dollar moved off daily lows across the board.The kiwi is among the top performers on Wednesday, ahead of the Reserve Bank of New Zealand (RBNZ) decision that will take place at 21:00 GMT. Market consensus points toward no change in rates but some consider possible a rate cut of 25 basis points.“Certainly, the hawkish speech by the Governor in February, followed by the surprise rate cut in March and then the hawkish April OCR review means that anything is possible tomorrow. We err towards a no-cut decision and the Bank maintaining an easing bias”, said analysts from BNZ.NZD/USD levels to watchToday the pair is consolidating above the 0.6970 area, that was an importance resistance. If it continues to hold above, a test of 0.7055 seems possible. The mentioned level capped the upside during April and also in May, becoming a key resistance. If NZD/USD rises above it would be trading at the highest level in exactly a year. The next medium term resistance comes below 0.7200.On the opposite direction, the pair would lose momentum if it drops back under 0.6960 in the short-term. Below here support levels could be located at 0.6890 (Dec high / June 8 low) and 0.6800 (20-day moving average). 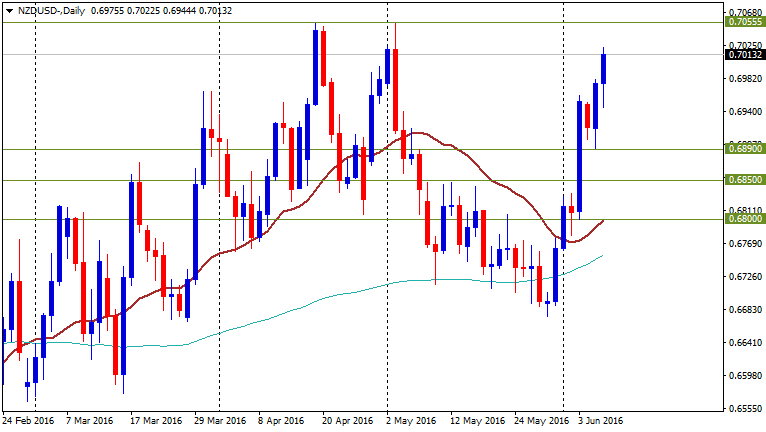