The GBP/USD pair extends its decline this Thursday, now trading a few pips above the daily low of 1.4448, down on dollar's demand, and despite slightly better-than-expected UK trade data. Earlier today, the kingdom released its Trade Balance figures for April, which showed that the UK’s deficit on trade in goods and services was estimated to have been £3.3 billion in April 2016, a narrowing of £0.2 billion from March 2016. The Goods trade balance for the same period, showed a deficit of £10.5 billion in the same month, below expectations of £11.2 billion. Exports and Imports increased modestly. 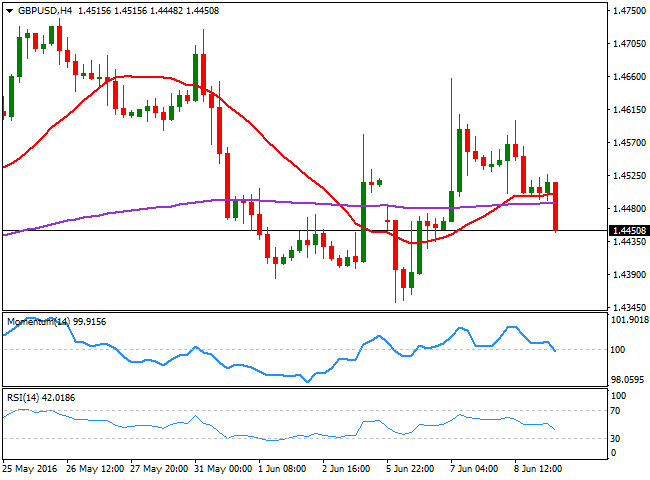 Nevertheless, the Pound risks further declines for today, as the looming Brexit referendum fuels the negative sentiment towards the currency, exacerbated by dollar's strength. The 4 hours chart for the GBP/USD pair, shows that the price is breaking below its moving averages with a large candle, indicating large selling interest, whilst at the same time, the technical indicators head sharply lower, entering negative territory.
The pair is now poised to extend its decline towards the 1.4400 region, on a break below the mentioned low, while further declines can see the pair testing this week low of 1.4351. The 200 EMA, around 1.4480 is the immediate resistance, followed then by 1.4520. It would take an advance beyond this last, to deny the bearish continuation, and see the pair attempting to recover further, up to 1.4550/60.
Source