Market's sentiment turned sour in Asia with poor Chinese inflation figures reviving concerns over the economic slowdown in the country. The Consumer Price Index fell by 0.5% in May, doubling expectations of a 0.2% decline, whilst the year-on-year reading came in at 2.0%, below the 2.3% expected. Stocks plummeted in Asia, leading to a sharp negative opening in European ones.
The American dollar benefited against all of its European rivals, with the EUR/USD pair returning to its early week comfort zone around 1.1350/60. The German Trade Balance for April showed a surplus of 25.6 billion euros in April 2016, compared to a year earlier, when the surplus amounted to 21.8 billion euros. Exports came in flat, at 0.0% whilst imports fell by 0.2%. 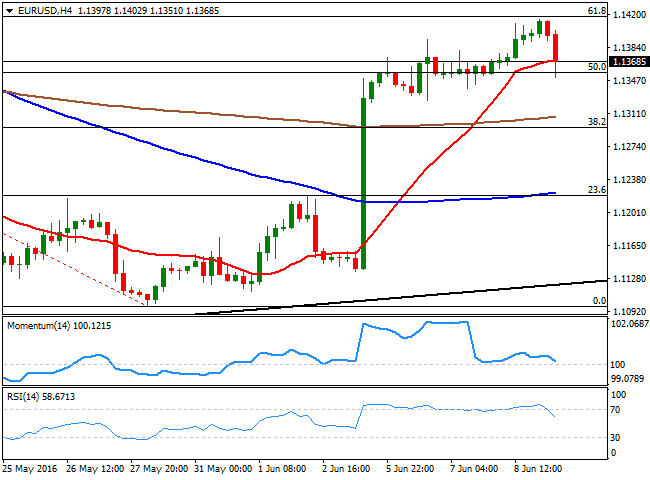 The US will release its weekly unemployment claims later today and its wholesale inventories for April, data that usually has a limited impact over the market.
The EUR/USD pair retreated from a major resistance, as earlier in the day, the price reached 1.1415, a couple of pips below the 61.8% retracement of the May's decline, and now presents a mild bearish tone in the 4 hours chart, as the price is pressuring its 20 SMA, whilst the technical indicator have turned lower, and are close to cross their mid-lines.
The 1.1320/30 region is the immediate support, with a break below it exposing the pair to a quick slide towards the 1.1280 region. Above 1.1380 on the other hand the pair can extend its advance up to 1.1420, while above this last, 1.1460 is the next bullish target for today.
Source