EUR/USD dropped sharply during the last hours after reports signaled that the European Central Bank was concern about a shirking pool of the eligible debt of the purchase program. The euro dropped in the market; following the pound, that weakened earlier amid comments from Mark Carney, signaling a potential rate cut from the Bank of England soon.The pair broke below 1.1080 and tumbled to 1.1022, hitting a 2-day low. It was trading at 1.1065/68, down 50 pips for the days after being able to trim losses. Despite moving off session lows the intraday tone remain bearish.EUR/USD correction rally over?The recent slide could mean the end of the correction rally that started on Monday after the sharp decline following the Brexit referendum in the UK. EUR/USD initially recovered above 1.1000 and today, earlier, it reached 1.1154 before turning to the downside.Below 1.1030, support levels could be seen at 1.1000 (psychological), 1.0970 (June 27 low) and 1.0910 (June 24 low). On the opposite direction, resistance now seems to be located at 1.1085 (European session low), 1.1105 (20-hour moving average) and 1.1150/55 (daily high). 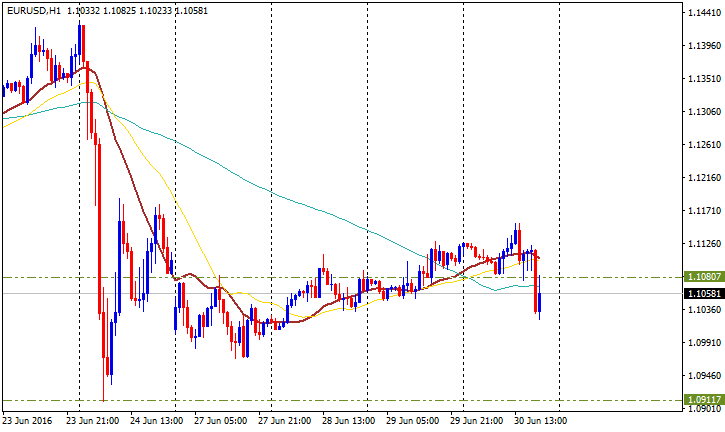