A third of the way through the votes it is closer than some would like. So we take this moment to observe the lack of lust for Gold when Brexiteers take the lead. 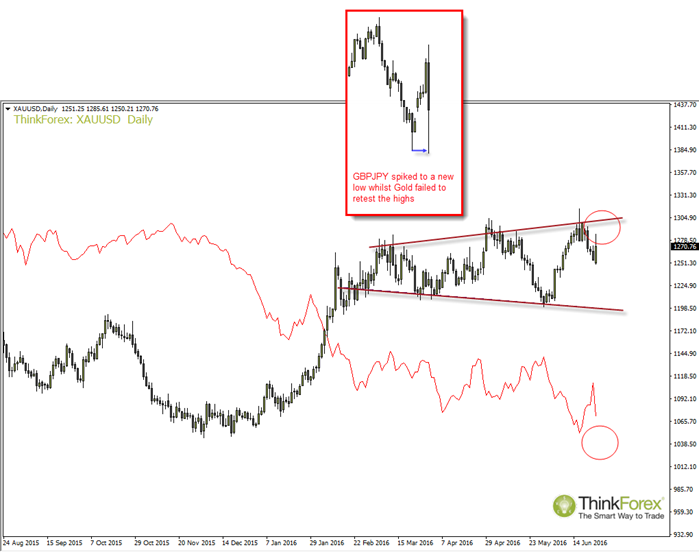 The inverted correlation between GBPJPY and Gold is as strong as ever but, upon closer inspection we'll see discrepancies between the risk relationship. As both JPY and Gold have benefited from risk off (most recently triggered by 'Brexiteers' taking the lead) then GBPJPY and Gold are obvious places to look for related movements.

The chart above shows the candlestick chart for Gold with GBPJPY overlaid as a line chart. Inset (red box) shows the candlesticks of GBPJPY to compared to Gold at the moment GBPJPY plunged to -8% on the session. As it became apparent that north-east England dominated the Brexit votes to push the leave group in front at 54%, GBPJPY promptly sold off to break to new lows (inset picture). However, Gold failed to get anywhere near the previous high, let along test it. If we assume Gold to move up and GBPJPY to depreciate at the same time, then by comparing the relationship between the swings we can quickly assess the weak link.

The reason I see this as important is that if we find UK do indeed remain in the UK, then it is plausible that Gold will sell off a lot harder than GBPJPY may rise in percentage terms.

We also highlight a potential expanding wedge pattern which, after an uptrend, is bearish. Now that today's high has failed to expand the upper boundary further then we can consider the potential for Gold to have topped.

Conversely, if UK does leave the EU then according to the relationship above, GBPJPY could well fall further in percentage terms than Gold rises as it remains the bullish laggard.