Yet the buying party came to an abrupt end when the highly-anticipated Coinbase listing failed to push prices even higher. Euphoria turned to fear as traders sold the news, prompting Bitcoin to plunge 15% before bouncing. 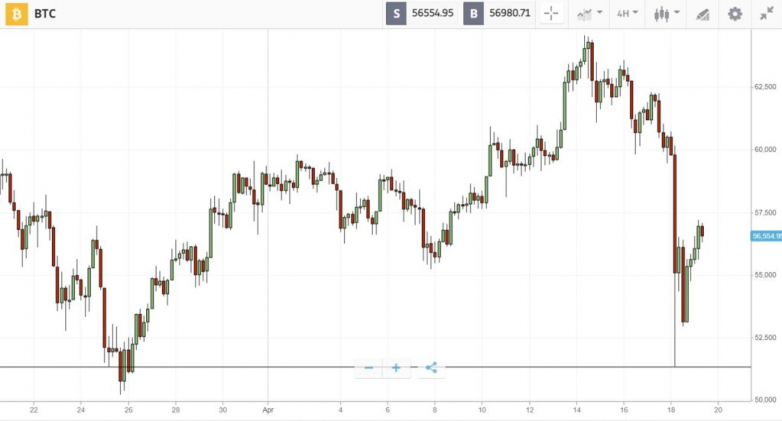 When the dust had settled, Bitcoin was down 5% on the week. Ethereum fared slightly better with 5% gains, and NEO managed to dodge the destruction completely by rising 90%.

As Bitcoin entertained the world with a cliff diving performance on Saturday evening, $7.6 billion in long positions were wiped out in an hour as highly leveraged traders were taken out of the market.

Analysts offered several different explanations for the sudden drop. The anti-climactic Coinbase listing is one, along with a sudden electricity blackout in China’s Xinjiang region which took out a sizable proportion of the Bitcoin network. Turkey’s ban on using crypto for payment was also blamed for the fall, and an unsubstantiated rumor that the U.S. Treasury was planning to crack down on money laundering carried out through digital assets.

As Turkey imposes harsh restrictions on cryptocurrencies and India looks set to follow, the U.S. could be moving in the opposite direction.

On Saturday, pro-crypto regulator Gary Gensler was sworn in as chairman of the Securities and Exchange Commission (SEC), making him the top cop on Wall Street.

Gensler, who previously taught a course called ‘Blockchain and Money’ at MIT, has demonstrated a deep understanding of cryptoassets, and is widely expected to take a forward-looking approach to the market. He may even help push the SEC towards finally approving a Bitcoin Exchange Traded Fund (ETF).

After the sudden downturn, Bitcoin has rebounded to once again trade around $57K, clocking 10% growth from the low.

To confirm continuation of the bull market, traders will be looking for a recovery towards all-time highs. This would be supported by macroeconomic forces, with U.S. inflation data released last week showing a faster rise than expected in March.

On the flipside, failure to continue bouncing could suggest that the sudden downturn has significantly damaged bullish momentum.