After Unprecedented Stimulus, ECB is Set for Change of Focus

Preserving favorable financing conditions over the pandemic period.” Those are the words from the European Central Bank that are likely to come to the fore over the next few months, as the Frankfurt-based organization changes tact after bolstering its 1.85 trillion-euro stimulus package in December. The ECB’s Governing Council, led by President Christine Lagarde, will now likely pause for the foreseeable future and use this week’s meeting to steer markets in a new direction, as well as discussing the strength of the euro. 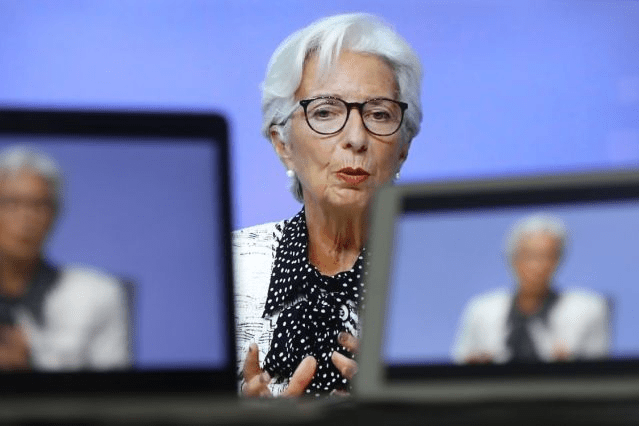 “A more realistic objective, (rather) than aiming for 2% inflation two or three years ahead, is thus to focus on protecting favourable finance conditions, at the lowest cost possible while allowing a longer period for inflation to converge to target,” said Anatoli Annenkov, a senior European economist at Societe Generale, in a research note. “We thus see the ECB on hold for the near term, although growth expectations are weakening amid prolonged lockdowns.”

Some market watchers believe this focus on financial conditions, effectively whether banks are lending to businesses and the real economy, may be a ploy so there’s less of a spotlight on sovereign yields — how much interest the euro zone governments are paying on their debts.

Inflation in the euro area is close, if not at, record lows and the ECB’s December staff projections also notched a new low. On top of that comes the euro’s recent strength which is an additional drag on inflation. The single currency is currently trading near $1.2119 but was closer to $1.10 before the onset of the coronavirus pandemic.

Why investors have backed the euro is not entirely clear, especially as it looks like the U.S. Federal Reserve will lift rates a lot earlier than the ECB.

At a Reuters event this month, Lagarde said the central bank will be “extremely attentive” to foreign exchange movements and its impact on consumer prices. France’s Governor François Villeroy de Galhau also stressed the need to examine any negative effects of the euro’s strength on inflation in an interview with French TV.

While the ECB is set to be on hold for the next few months, it will likely focus on its recently-announced strategy review.