AUD Up as Risk Sentiment Recovers, GBP Down on “Plan B” 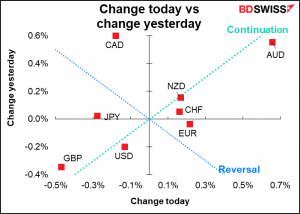 The AUD rally continued (as did JPY retracement) as risk aversion wanes and the “risk-on” mood spread. The S&P 500 was up 0.3% yesterday, bringing it back to where it was before the news of the Omicron variant hit right after Thanksgiving. At 19.9, the VIX index is still a little bit above that level (18.6) but not significantly so – it had been as high as 35.3 briefly.

There was some good news behind the improvement in sentiment. Pfizer and BioNTech said an initial study showed that three doses of their vaccine neutralized the Omicron variant, while the European Centre for Disease Prevention and Control (ECDC) reported that of the 337 Omicron cases reported in the EU/EEA so far, “All cases for which there is available information on severity were either. So these are hopeful points, albeit only preliminary and based on small studies.

Meanwhile, the UK went to “Plan B” as virus cases continue to rise. Under the new restrictions, proof of vaccinations or a negative COVID-19 test will be required to enter nightclubs and large venues from next week, while face masks will be mandatory in most indoor settings. People in England will also be asked to work from home “if you can” from next week.

While cases are rising, deaths aren’t, at least not by anywhere near as much. I don’t know whether this is because more people are vaccinated (and therefore less likely to become seriously ill), the new variants are less deadly, or perhaps because the most vulnerable people have already been picked off. 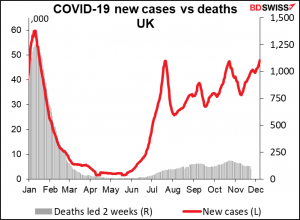 In any case, the reimposition of these measures plus the likely weak data coming out early tomorrow (see below) makes it less likely in my book that the Bank of England will hike rates next week. This would be negative for the pound.

Yesterday’s US Job Openings and Labor Turnover Survey (JOLTS) report was even better than expected. Job openings are almost back to their record high set in July (11.033mn vs 11.098mn). The quit rate fell back a bit but still remains the third-highest ever at 2.8%. 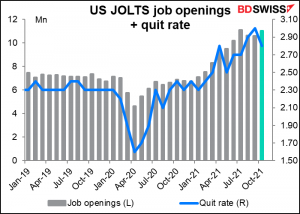 The rise in jobs pushed the job-openings-to-unemployed ratio up to a record 1.46, well above where it was before the pandemic. 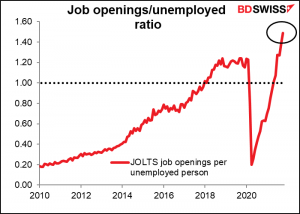 The results pushed the odds of a May or even March “lift-off” slightly higher (looked at the other way, the odds of rates remaining unchanged where they are now at the May meeting fell to 42.8% from 44.2% and at the March meeting, 63.0% from 64.1%). But USD wasn’t much affected – I think the idea that the Fed is likely to increase its taper at next week’s meeting is probably baked into the price already. 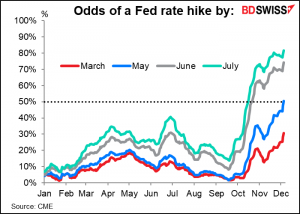 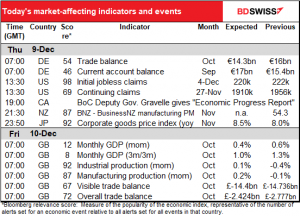 Not much on the schedule today.

US initial jobless claims rose last week, giving back a little less than half their stunning 76k plunge of the week before. This week they’re expected to be little changed (-2k), which would keep them below the four-week moving average. 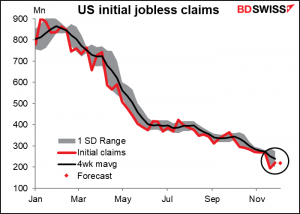 At this level (220k), initial claims are back to normal – indeed, at the low end of normal — so should we still be making a big deal over them each week? I think while the Fed is still trying to determine whether the US has hit “maximum employment,” anything related to the job market is important for the markets. 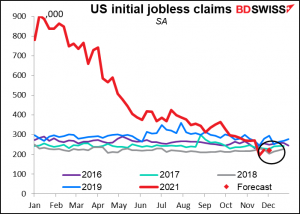 Continuing claims are expected to continue their seemingly inexorable decline. I think I can probably stop following this one. 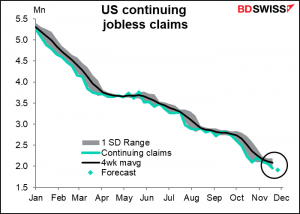 And that’s about it for today! Those who are interested in Canada will want to catch Bank of Canada Deputy Gov. Toni Gravelle’s Economic Progress Report, which will no doubt explain the thinking behind yesterday’s Bank of Canada rate decision.

Then overnight we have the UK “short-term economic indicators.”

The most important of them is the monthly GDP figure. It’s expected to show that growth is slowing. It’s likely to slow further too, what with supply bottlenecks, falling household spending, the government removing fiscal support, and the labor force still below where it was before the pandemic began. On top of that, news of “Plan B” now… Unless there’s some big upside surprise, I think today’s data plus “Plan B” make it less likely that the Bank of England will risk raising rates next week. That’s probably going to be negative for the pound. 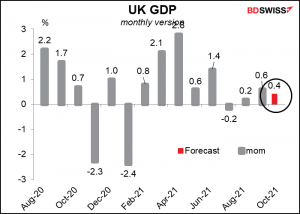 Both industrial and manufacturing production are expected to be up a mere 0.1%  mom, which explains why there’s only one dot here. This isn’t very good – I’d have expected more of a rebound after the previous month’s decline in IP. Maybe companies are still working off the effects of the large rise in production in August? In any case, at this rate IP would be 1.3% below pre-pandemic levels and manufacturing production 2.1% below, so the country still has some ways to go before it’s recovered. 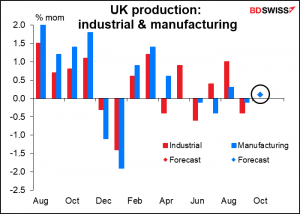 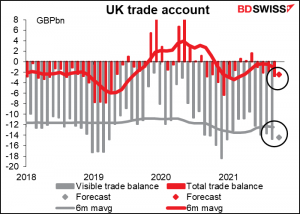 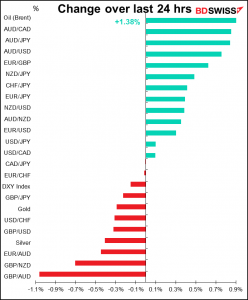