AUD Up, JPY Down as Inflation Expectations Rise 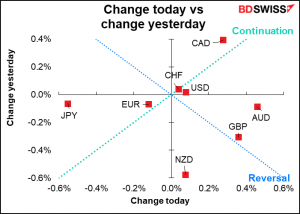 Global bond markets led the way as yields rose around the world. US yields were higher for the third day in a row; the 10-year yield is now up 18 bps since last week’s Federal Open Market Committee (FOMC) meeting. 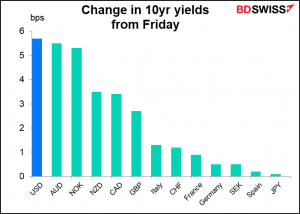 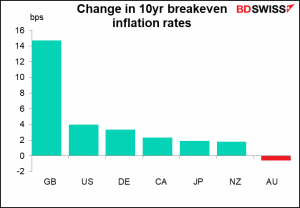 As US long-end yields break out of their recent range, real US yields have fully retraced their declines in July, mostly through higher nominal yields rather than lower inflation expectations. This explains to some degree the recent strength of the dollar. 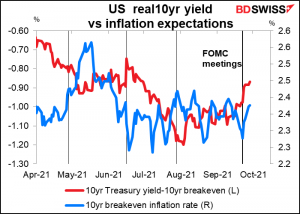 Similarly, oil was up for the fifth day in a row, buoyed by the growing focus on global power cuts, particularly in China, which has increased market concerns about possible energy shortages. Reflecting that, oil futures remain in deep backwardation (distant contracts costing more than near contracts), implying that people are concerned about whether they’ll be able to get enough oil supplies in the future. 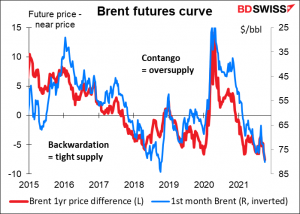 This also explains why CAD was a) higher and b) close to the “continuation” line in the second graph.

AUD was the best-performing currency as commodity prices rallied and the reflation/reopening trade continued to perform.

On the other hand, JPY was the worst-performing currency as US rates rose, widening the US-Japan rate differential (which is almost entirely a function of US rates thanks to the Bank of Japan’s “yield curve control” program, which restricts the movement of long-term Japanese rates). Also there was a general “risk-on” mood in the stock market, despite what you might think from the -0.3% decline in the S&P 500 – the S&P 500 is relatively heavily weighted toward tech, which struggled.

AUD/JPY has been battered by the lockdown in Australia. I think it should recover strongly at some point. 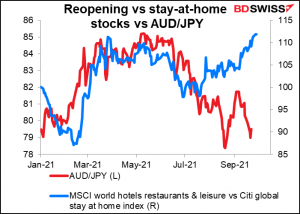 Following some controversy about their stock trading, Boston Fed President Rosengren and Dallas Fed President Kaplan have resigned. Neither man was a voting member of the FOMC this year so it won’t have any immediate effect on the balance of power on the Committee. Nonetheless, they are both on the “hawkish” side and are likely to be replaced by more centrist or dovish people. That could tilt the conversation somewhat now. Next year, when the Boston Fed president will be a voter, the change will have an effect on the votes. 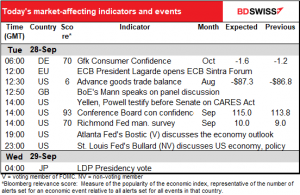 The European Central Bank (ECB)’s annual symposium in Sintra, Portugal begins today, except it’s taking place in cyberspace, not Portugal. You can see the full details, including the agenda, on the ECB’s website. The interesting points today will be President Lagarde’s half-hour speech plus the panel discussion on “The Future of Inflation,” chaired by ECB Board Member Schnabel.

Meanwhile, back in the US, Treasury Secretary Yellen and Fed Chair Powell testify before the Senate Banking Committee on the CARES Act (The Coronavirus Aid, Relief, and Economic Security Act, the $2.2tn economic stimulus bill passed in March last year). While Powell is sure to discuss the progress the Fed has made on winding down the lending facilities created under the Act, it’s also likely that Powell will field some questions about the Fed’s plans to taper down its bond purchases. I assume they two will also take this opportunity to beg & plead for Congress to raise the debt ceiling before disaster hits.

The US advance trade balance is certainly the least-noticed US indicator that I follow, with a Bloomberg relevance score of only 6. Yet I can’t shake the feeling, impressed on me when I started out in FX, that trade figures are important for the FX market (spoiler alert: they used to be, but now capital flows swamp any impact from trade flows. The dog that wagged its tail has become the tail: capital flows are now the dog.) 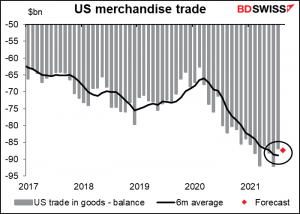 The advance trade balance deals only with merchandise trade, as opposed to the overall trade balance, which includes services as well.

The merchandise trade data is being distorted by congestion at the ports, which are having to handle record amounts of freight while missing a lot of workers. According to press reports, shipping traffic is up 50% from pre-pandemic levels and a record 70 cargo ships are waiting to unload at the Los Angeles and Long Beach ports, which handle 40% of the US’ imports. 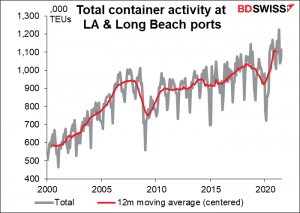 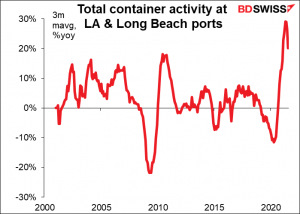 Looking at the record excess of containers coming in over those going out, it looks to me like the trade deficit is probably widening even more than the figures show. (I also wonder what happens to the containers that come in but don’t get shipped out again??? Maybe this is one cause of the worldwide shortage of containers.) 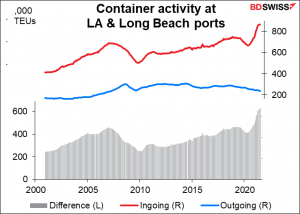 The Conference Board consumer confidence index is expected to turn up a bit, as did the U of M consumer sentiment index earlier in the month. No big thrill there unless it comes in dramatically different from the forecast. 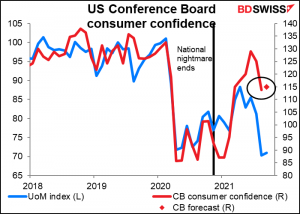 Then overnight we have the vote for the presidency of Japan’s Liberal Democratic Party (LDP). Since the LDP has a majority in the Diet, this is the same as the election for the Japan Prime Minister.

All indications are that none of the four candidates will get a majority in the first round of voting, when the 383 LDP Diet members have the same number of votes as the 1.1mn LDP rank-and-file. In that case, it goes to a second round of voting between the top two vote-getters, who are almost guaranteed to be Mr. Taro Kono and Mr. Fumio Kishida, as Ms. Sanae Takaichi and Ms. Seiko Noda are both unlikely to win as they are missing something deemed essential to being a responsible adult in Japan (Japan ranks 120th out of 156 countries in the Global Gender Gap Report.) (Having said that, Ms. Takaichi is hardly a voice for gender parity herself – she’s so conservative she voted against allowing married couples to use separate names even though she continues to use her maiden name.) In that case, the 383 Diet members again get one vote each but this time the rank-and-file only get one vote for each of the 47 prefectures, which in essence means that the LDP Diet members pick the winner.

The first round of voting will be held at 1 PM local time (04:00 GMT) and the results should be known an hour later. If it goes to a second round, it’s not clear when the tally will be known but it should be during Japanese market hours.

It’s not clear what will happen in the second round. Many Diet members favor the more conservative Kishida. Kono on the other hand is more popular with the rank-and-file; he has 2.4mn followers on Twitter (in Japanese and English, which he speaks fluently) and regularly tops opinion polls for who should be the next PM. However he is thought to be a “maverick” within the LDP, which is usually the kiss of death. Much better just to toe the party line and wait for your turn as PM to come up when you’re 83. But on the other hand (yes, three hands, I know, not advisable) there’s a general election coming up in November and many of the younger LDP members or those in urban areas are eager to have their picture appear next to a popular PM.

A Kyodo News survey found that around 135 of the 382 LDP Diet members support Kishida, around 100 back Kono, fewer than 100 are for Takaichi, and Noda will have trouble getting 20 votes. The key point though is that Takaichi’s supporters are likely to go for Kishida on the second round, giving him a big advantage there.

With Kishida and Kono the frontrunners, a victory by Takaichi would certainly be the big surprise and therefore have the largest impact on financial markets. Probably the stock market would rise due to her aggressive stance on fiscal stimulus, which might also cause the yen to weaken (a standard “risk-on” reaction). However I think the chances of her winning are similar to those of the proverbial snowflake etc.

Kishida on the other hand might cause stocks to fall due to his “New Japanese Capitalism” thesis – he wants companies to adopt a “triple win approach” to management so that not only shareholders but also employees and business partners benefit from the company’s gains (i.e., pay higher wages instead of retaining earnings. I happen to think this is a good idea, as Japanese companies are net savers, but of course shareholders might disagree.) That would probably be positive for the yen. 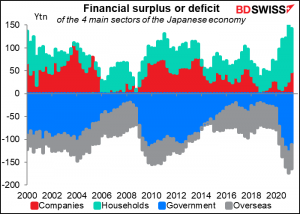 Kono’s economic policy on the other hand is broadly similar to that of the outgoing PM Suga’s, so his victory might not have much of an effect on stocks or the yen (although I just saw something on Twitter this morning that he said they had to keep a strong yen, because a falling yen could cause inflation – I wonder if he’s been reading the financial press for the last decade or so?)

In fact, none of the candidates have been entirely clear about their economic policy. Kono for example, although known for his blunt and sometimes rude way of speaking, said he wants to “achieve a sustainable, warm and strong economy and society.” Who could disagree? So the ultimate direction of policy will only become clear once he or she has chosen their of economic ministers (finance minister, economic and fiscal policy minister) as well as special advisors to the Cabinet on the economy and financial matters, and put together a Cabinet. That will take place in early October, only to be thrown into question a month later when the general election takes place. 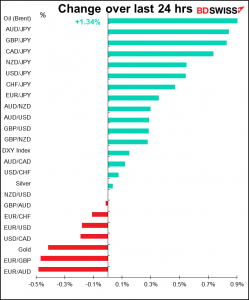