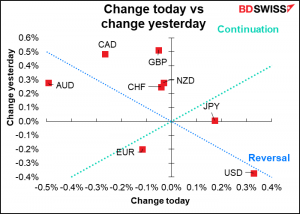 AUD weakened during most of the European and US day Friday. It tried to rally at the start of trading Monday, but apparently thought better of it and resumed falling. General risk aversion could be behind the move – most stock markets in Asia are lower this morning, although the S&P 500 is indicated opneing marginally higher.

There were reports Friday that the Biden administration is weighing a new investigation into Chinese government subsidies and their damage to the US economy as a way to pressure Beijing on trade. According to The Wall Street Journal, the administration is targeting Beijing’s widespread use of industrial subsidies that give its companies an edge over foreign rivals, an effort that could lead to new sanctions on Chinese imports and further strain US-China relations. Administration officials are considering launching an investigation into Chinese subsidies under Section 301 of the US trade law. The White House is also looking to team up with the EU, Japan and other allies in Asia, and rally support within the World Trade Organization to take on Chinese subsidies. Australia could get drawn into the fray, seeing as it already has some trade friction with China. That could be damaging to the country’s crucial exports to China.

Comments by Philadelphia Fed President Harker may also have dampened sentiment. He was quoted in the Nikkei saying he supports tapering “sooner rather than later,” which may have bolstered USD and hit AUD. However this has been his well-known position for some time, and anyway he doesn’t vote this year.

Otherwise, the news out of Australia is generally positive. The virus outbreak in New South Wales is showing signs of peaking and the state has begun easing some restrictions. Watch for the Australian employment data on Thursday. That’s expected to show a drop in employment & a rise in the unemployment rate, which could be negative for the currency (if it’s not discounted already by that time).

Positioning in AUD has also turned against the currency – see below.

Little change overall in speculators’ net USD position, but that masked some notable changes in allocation. There was a big increase in EUR longs, largely offset by sizeable increases in AUD and GBP shorts, the former perhaps in response to the Reserve Bank of Australia meeting that took place earlier on the day, in which they kept rates and bond purchases steady but extended their quantitative easing program until at least next February (a “dovish taper.”) There was also a smaller increase in CAD shorts, and the unwinding of most CHF longs. NZD stands out as flipping from short to long, perhaps in response to that country’s success in dealing with its recent virus crisis. 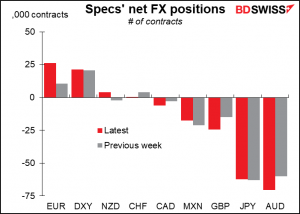 Hedge funds massively increasing their AUD short positions. Their short AUD position is now as large as their long AUD position was a month ago. They flipped from long GBP and CAD to short while trimming their EUR short. 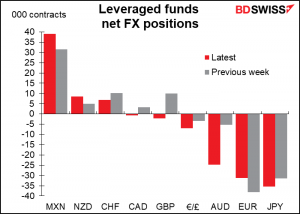 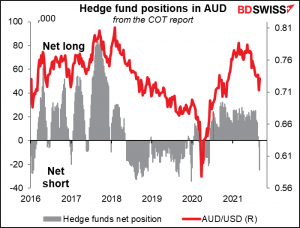 Retail on the other trimmed their AUD shorts while increasing EUR longs. 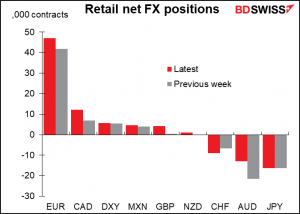 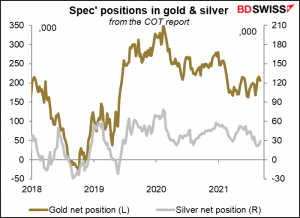 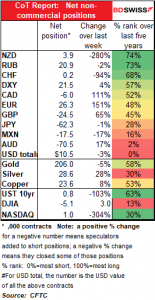 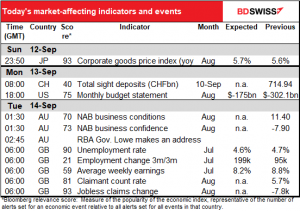 About as quiet a day as you’re going to get without any holidays.

Last week, Swiss sight deposits fell slightly. Has the Swiss National Bank backed off now that EUR/CHF has stabilized? Tune in today to find out! 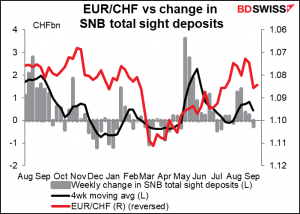 Overnight we get the National Australia Bank business sentiment indices. No forecasts, but I can still make a graph for you. 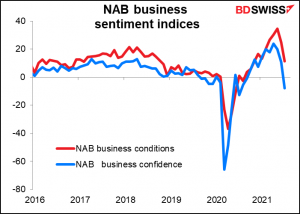 Then we wait for sunrise over the Thames and the UK employment data. Like many central banks, the Bank of England is paying a lot of attention to the employment data, although they have one concern that most other CBs don’t: wage settlements over the rate of inflation. That could spark concerns about cost/pull inflation that might set off an inflationary spiral. The market expects though that the rate of wage increases has peaked, which could relieve the Monetary Policy Committee’s concerns. 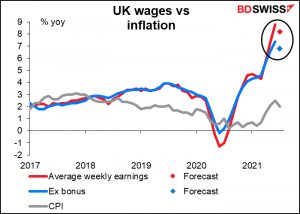 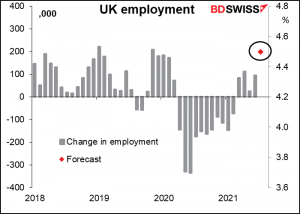 Higher employment is expected to lead to a lower unemployment rate. 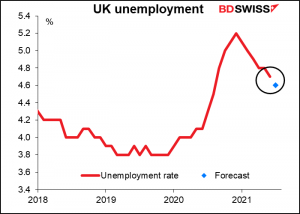 People will be watching to see how the labor market develops as the furlough scheme tapers to its final stage in August before ending completely at the end of September. People may therefore pay attention to the jobless claims and claimant count rate, which come out a month before the unemployment data, to try to “peek around the corner” at what will happen after the scheme expires – never mind that the UK Office for National Statistics (ONS) stopped including these two series in its statistical bulletin in 2017 because, it said, the series “may now be providing a misleading representation of the U.K. labour market.” 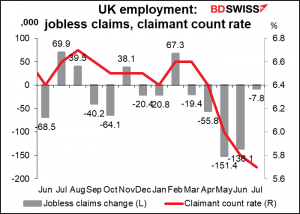 If you’ve ever wondered what the concept of comparative advantage means in practice, this tweet I saw yesterday from an economist explains it nicely:

Economics lost a star tonight: Emma Raducanu, in spite of your amazing A-Levels in Econ, we respect your comparative advantage and congratulate you on the amazing US Open win!

Twenty years ago Saturday was 9/11. I was living in Tokyo then but was in New York for a conference. Not only was I in NYC, I had an appointment at the WTC at around 10 AM. We were supposed to go see Oppenheimer Funds, which was on the 31st-34th floors of the South Tower. We were waiting in our office up around 59th St when the first plane hit the North Tower. Every dealing room has a TV set on all the time, so we immediately knew that there was a problem. It wasn’t clear what the problem was though – we thought it might have been a fire at the restaurant on the top of the building, Windows on the World. So we assumed we’d still be going to our meeting.

A little while later the second plane hit – with all the TV cameras already focused on the North Tower, that hit was broadcast live– and that was it. They turned off the lights in the dealing room and sent everyone home.

I was staying in a hotel right next to Grand Central Station. I thought if I were a terrorist, I’d blow up the train station a few hours later as everyone tried to get home. I therefore decided not to go back to my hotel. One of my colleagues and I went to Central Park instead and spent a surprisingly pleasant afternoon. It was a beautiful late summer day, warm, the sun shining, the sky blue…there was no hint in Central Park of the death and destruction that had happened a few miles downtown. People were streaming out of their offices and there was a kind of festive air, oddly enough.

I had gone to New York to speak at a conference we were holding about Japan that very night. We had hired a famous professor of Japanese business studies to give the keynote address and, being the firm’s guy in Japan, I was the #2 speaker. It was a big opportunity for me. I never got it, but of course that was an insignificant loss in the scheme of things. I wound up being stuck in New York for a week since no planes were allowed to fly. Never did give that presentation. 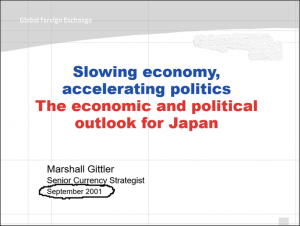 We all know who the villains of that event were. There were many many heroes too, most of them anonymous. Many first responders are still suffering health problems. One of the best-remembered heroes was the head of security for Morgan Stanley, Rick Rescorla, who anticipated the attack and insisted that his company prepare, which saved some 2,700 lives, unfortunately not including him. I recommend the New Yorker profile of him.

Since then I always keep a smoke mask in my desk drawer at work, on airplanes, and in hotels. When I lived in a tall building, I bought an emergency ladder. I always make sure to know where the exits are. I listen to the emergency explanations on airplanes every time. I learned that things you could never imagine do indeed happen. 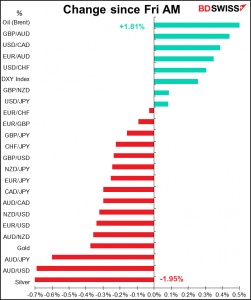