Bitcoin’s Struggle to Break Away from Support 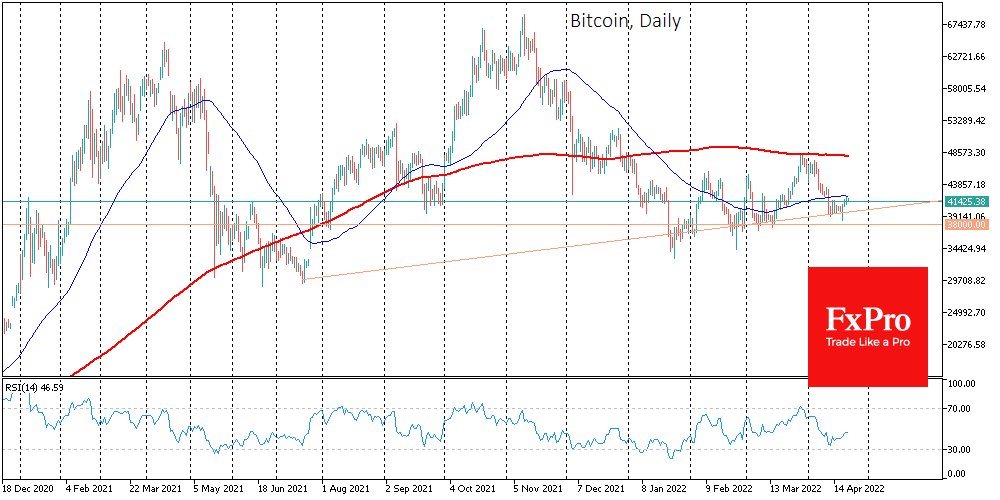 The cryptocurrency Fear & Greed Index is now in its third day, staying at 27 points (fear), but we see a slight upward movement in the market.

In the crypto market, as in the high-tech Nasdaq, we can call it cautious demand from buyers of the deep, but this support is not turning into a rally. The strong correlation between the tech sector and bitcoin is holding the latter back.

That said, the very fact that bitcoin has managed to lock in an uptrend and attempts to push back from that support is setting up positives for the coming days.

Bitcoin’s uptrend of the last four months can be extended to the left, and then it appears to be close to the July 2021 low, which was then near 30k. If we are right, bitcoin, and subsequently the entire crypto market, are saved from falling into a crypto winter by long-term buyers who find the current levels quite attractive.

Glassnode does not rule out that bitcoin has already formed its “bottom”, although it cannot yet break out of its range formed since February. The process of redistributing coins from speculative investors to “hodlers” is likely already complete, which will reduce selling pressure going forward.

According to BitInfoCharts, the world’s third-largest bitcoin whale has acquired 2,822 BTC worth $117 million in the past seven days. In 2022, 3.6 million Americans will use cryptocurrency to make purchases, a report by research firm Insider Intelligence predicts. The number of cryptocurrency users in the US is expected to rise to 33.7 million by the end of this year.